Five-time world champion Viswanathan Anand failed to utilise most of his opportunities in the final game as he finished joint sixth while Magnus Carlsen stamped his authority. 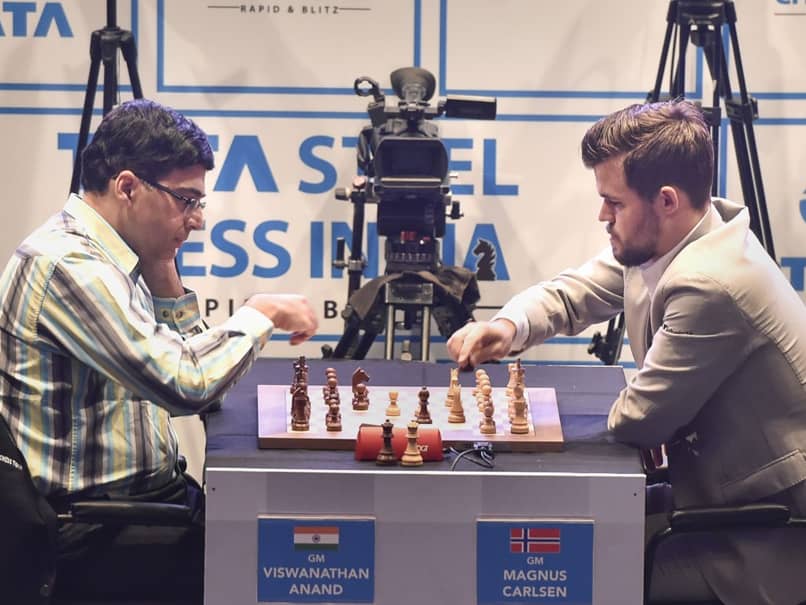 Viswanathan Anand failed to utilise most of his opportunities in the final game.© PTI

Five-time world champion Viswanathan Anand failed to utilise most of his opportunities in the final game as he finished joint sixth while Magnus Carlsen stamped his authority in the rapid chess to win by a huge margin in the Tata Steel Rapid and Blitz chess tournament on Sunday. Anand, who struggled in the last game of the second day against Anish Giri of Holland, did not quite re-work his energy and lost to Carlsen in the first game of the third day and then made a draw with compatriot Vidit Gujrathi. In the final rapid game, the die was cast and Anand was clearly much better against another compatriot P Harikrishna. But the game again pattered out to a draw, leaving Anand with a joint sixth-place finish in the rapid section of the strongest tournament on Indian soil.

Reigning world champion Magnus Carlsen had nothing to complain about even though he was busy ringing the bell for the pink ball cricket Test between India and Bangladesh.

The Norwegian showed yet again why he will be hailed as one of the finest players ever as he beat Anand first and then Ding Liren in the final round. In between, a draw with Harikrishna happened, wherein too Carlsen was pressing for a victory for a long time.

With the rapid section over, Carlsen was leading with a whopping 15 points out of a possible 18, while American Hikaru Nakamura was a distant second on 11 points followed by Wesley So of United States, Anish Giri of Holland and a resurgent Levon Aronian of Armenia at joint third spot on nine points each.

Anand, with eight points, is still in the mix of things with Ding Liren of China and Harikrishna with 18 games still to come in this marathon.

Ian Nepomniachtchi of Russia was ninth currently on seven points and Gujrathi last with six points to his credit.

Anand is still very close to making his debut in the grand finale of the grand chess tour. He just needs to stay close to Wesley So to make his qualification happen and as things stands now, it looks more likely that Anand will beat Wesley to the London berth.

The games were entertaining as ever as Carlsen and Anand fought on early in the day. Anand was in an attacking mood but the Norwegian proved better in defence and got the first win of the day.

Anand could not do much against Gujrathi in the eighth round but he did try to make it count and was close to being winning against Harikrishna in the final round.

Round 8: Ding Liren drew with Giri; Gujrathi drew with Anand; Harikrishna drew with Carlsen; Nepomniachtchi drew with Aronian; Wesley So lost to Nakamura.

Comments
Topics mentioned in this article
Chess
Get the latest updates on IPL 2020, check out the IPL Schedule for 2020 and Indian Premier League (IPL) Cricket live score . Like us on Facebook or follow us on Twitter for more sports updates. You can also download the NDTV Cricket app for Android or iOS.