India play their first day-night Test at Eden Gardens, with Indian cricketing superstars, past and present, and political luminaries add to the occasion. 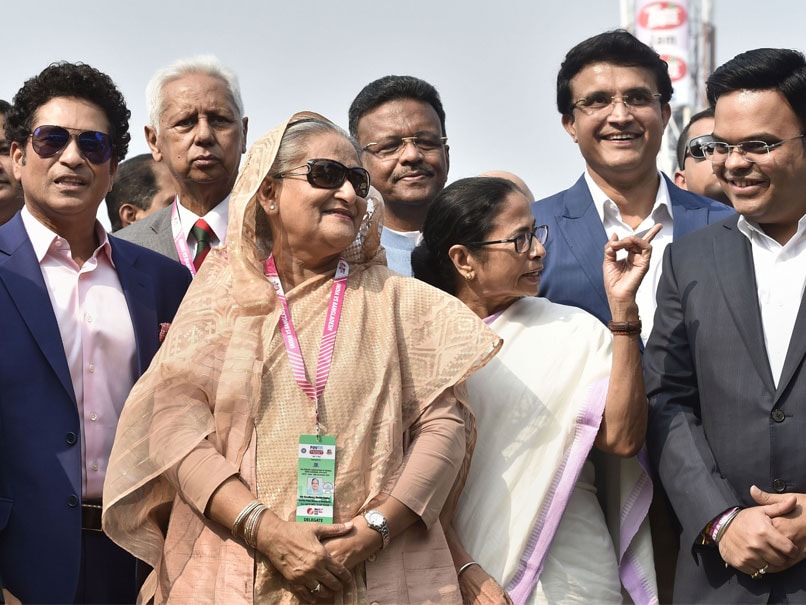 The Eden bell was rung by Sheikh Hasina and Mamata Banerjee in the presence of Sourav Ganguly.© Twitter @BCCI

India today made their debut in the pink-ball era with Bengal Chief Minister Mamata Banerjee and Bangladesh Prime Minister Sheikh Hasina ringing the ceremonial bell at Kolkata's Eden Gardens to mark the country's first-ever day-night Test against Bangladesh. Cricket legend Sachin Tendulkar has come to watch the match besides the Bangladesh PM, Ms Banerjee and thousands of spectators at the stadium.

The Eden bell was rung by Sheikh Hasina and Mamata Banerjee in the presence of Sourav Ganguly.

After long resisting the latest innovation in Test cricket, India will join the party that is aimed at increasing crowds and TV audiences for the longest format of the game. Day-night Tests were successfully introduced in 2015 but it took India a new BCCI regime under former captain Sourav Ganguly to take the pink ball plunge. Ahead of the ongoing series, Ganguly convinced the Bangladesh Cricket Board to play a Test under floodlights and now he has arranged a grand spectacle at the Eden Gardens.

Australia's cricket chief Kevin Roberts had said that he hoped to convince India of the merits of a day-night Adelaide Test on their next tour during the 2020-21 season.

Under current ICC rules, the touring team can deny the home board's fixture requests, but that may change soon.

At home too, India were not open to the idea until Ganguly stepped into the picture and found skipper Virat Kohli on the same page.

Ganguly has not left any stone unturned to make India's maiden day-night Test a spectacle to remember. He has also promised a sellout crowd for the first three days of the match.

The first four days are indeed sold out, according to former India captain Sunil Gavaskar.

Kolkata is awash with pink for the match. Sourav Ganguly tweeted pictures of sweets and buildings in various shades of pink.

Landmarks like the Big Ben on Laketown, Howrah Bridge, Tata Centre, Eden Gardens, the Elliot Park, and Shahid Minar have been lit up in pink.

Amid all the hype, India are eyeing a 12th successive home series victory.

The pace attack of Mohammed Shami, Ishant Sharma and Umesh Yadav took 14 wickets in Indore as the hosts wrapped up the Test inside three days with an innings and 130-run victory.

Moreover, Kohli registered his 10th innings win as India's Test captain to go past MS Dhoni's tally of nine and Mohammad Azharuddin's eight as the hosts took a 1-0 lead in two-match series.

The win in Indore was also India's sixth consecutive Test victory as the hosts equalled their best-ever run in the longest format.

As far as the ICC World Test Championship is concerned, India sit at the top of the table with 300 points from 6 wins.