India vs Australia: Bhuvneshwar Kumar Explains His Reaction After Hardik Pandya Crashed To The Ground

Hardik Pandya was at the non-striker's end when a Bhuvneshwar Kumar shot felled him. 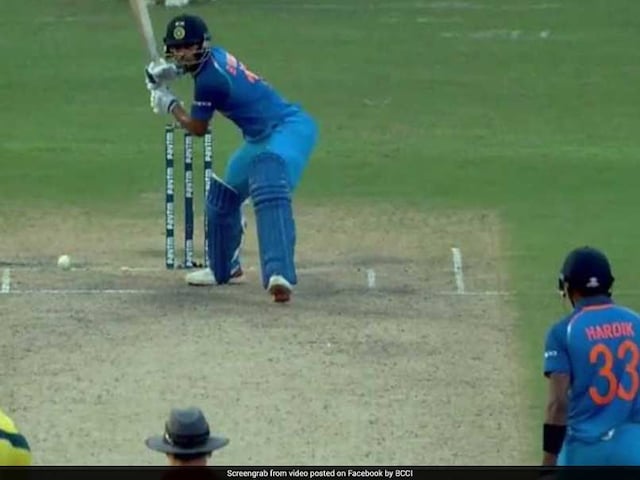 Fortunately, Pandya was not hurt and soon went back to the crease.© AFP

Team India must have heaved a sigh of relief, seeing Hardik Pandya standing on his feet after a Bhuvneshwar Kumar shot hit him flush on the grill of the helmet, sending the all-rounder crashing to the ground. Bhuvneshwar and Australian team rushed towards Pandya. Visiting captain Steve Smith immediately waved towards the dressing room for the physio. Fortunately, the all-rounder was not hurt and soon went back to the crease, with loud cheers greeting his recovery.

"I checked my bat just to reconfirm that it was indeed me who struck the ball with so much power," Bhuvneshwar told Kuldeep Yadav during a video interview on BCCI.tv.

There was consternation in both the Indian and Australian camps as Pandya took the shot, off pacer Nathan Coulter-Nile's bowling, and went down in a heap.

"When he got hit, we were all worried. It looked like a serious blow, but thankfully he was alright. Once he was back on his feet, we began planning about building a partnership," Bhuvneshwar said.

A brilliant opening spell from Bhuvneshwar and a terrific hat-trick from Kuldeep helped India beat Australia by 50 runs in the second ODI at Eden Gardens in Kolkata.

In three successive deliveries, Kuldeep (3/54) took the wickets of Mathew Wade, Ashton Agar and Pat Cummins in the 33rd over to become the second bowler in limited overs cricket to script a hat-trick at this venue and only the third Indian to record the rare feat in 50 overs cricket.

Bhuvneshwar bowled an impressive first spell comprising pace and swing as he finished with brilliant figures of 6.1-2 -9-3 including the wicket of dangerous David Warner.

Comments
Topics mentioned in this article
India Cricket Team Australia Cricket Team Bhuvneshwar Kumar Hardik Pandya Nathan Coulter-Nile India vs Australia 2017 Cricket
Get the latest Cricket news, check out the India cricket schedule, Cricket live score . Like us on Facebook or follow us on Twitter for more sports updates. You can also download the NDTV Cricket app for Android or iOS.