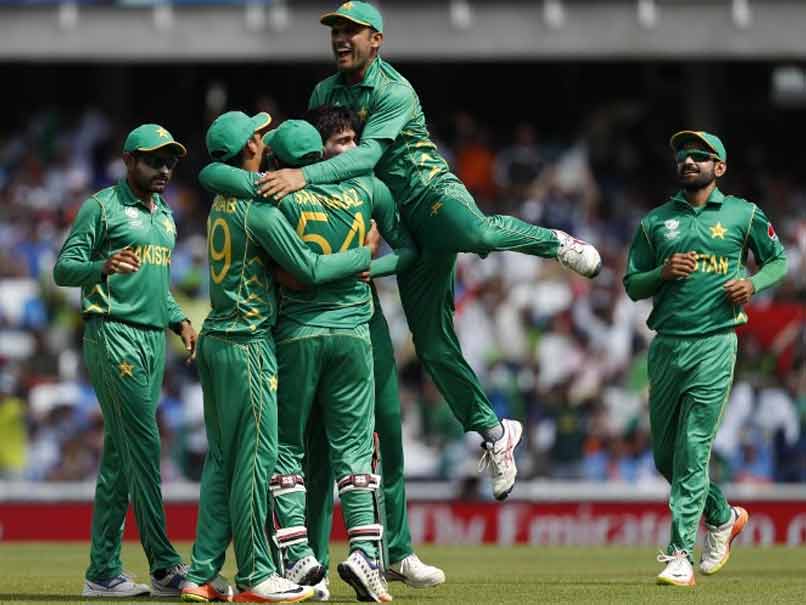 Catch highlights from the final match between India vs Pakistan straight from The Oval.

22:02 IST:As Pakistan celebrate their much-deserved win over fireworks and confetti, thanks so much for joining us this evening. Good night!

22:01 IST: "After the India (group) match, I said to the boys that the tournament doesn't finish here... And look we are here today," says winning captain Sarfraz Ahmed with a big smile.

21:57 IST: The Pakistan team are on the podium and ready to lift their maiden Champions Trophy!

21:56 IST:Indeed (disappointing). Congos to Pakistan... They can upset anyone on their day. Credit to Pakistan; they outplayed us," says a disappointed Kohli.

21:54 IST:Who got what at the prize distribution:

Fakhar Zamanis the Man of the Match of the final

21:18 IST: Last man Jasprit Bumrah comes to the crease. Pakistan are 1 wicket away from a resounding title victory.

20:50 IST: Excellent over from Fakhar Zaman. Just 3 runs off his over.

20:29 IST: Dejected Indian fans have started leaving the venue. India defeated Pakistan in the opener but staring at a defeat in the summit clash against the same opponents.

20:09 IST: Another bowling change for Pakistan. Shadab Khan comes into the attack. He is the youngest player to play in a Champions Trophy final.

19:57 IST: Four! Two back to back boundaries for Yuvraj. Brilliant counter-attacking play from India's star left-hander.

19:54 IST: Four!Hafeez comes on and Yuvraj comes down the track and hits it over mid-wicket.

19:54 IST:Mahendra Singh is the new man in. India are reeling at the moment in the run chase.

19:52 IST: Wicket!Dhawan now takes the long walk back to the dressing room. Cross seamed from Amir and it bounces a bit more that Dhawan expected. Gets the outside edge. India 33 for 3.

19:50 IST:Nice firm push down the ground from Dhawan. Will get a single.

19:47 IST:Yuvraj is struggling here. Another play and miss from the left-hander.

19:46 IST: Four!Cracking shot from Dhawan. That bat is making a good sound here.

19:44 IST: Four!Width on offer and Dhawan finds the gap through covers. Junaid Khan needs to get closer to the stumps.

19:41 IST:Amir is hitting the deck hard here. Getting a lot of bounce. He is testing Yuvraj Singh to the core here.

19:34 IST: Four! Hit on the up and Dhawan gets another boundary.

19:33 IST: Four!Short from Amir and Dhawan up to the task. Hooks it for a boundary.

19:28 IST:Yuvraj Singh is the new man in as India find themselves in a spot of bother.

19:23 IST: Wicket!Kohli departs. Gets the leading edge and Amir strikes again for Pakistan. India are in deep trouble here.

19:22 IST: Dropped!Amir got the outside edge and Azhar Ali at first slip drops an easy catch. Kohli survives a scare.

19:22 IST:Dhawan off the mark as well. India need to get off to a good start here.

19:15 IST:Kohli just flicks it off his hips and gets a couple. India are away in the run chase but they have lost the key wicket of Rohit Sharma.

19:14 IST:Virat Kohli is the new man in and gets a beauty first up. Amir is on fire.

19:13 IST: What a delivery to get rid of Rohit Sharma. Got the ball to nip back into the right-hander and Rohit was struck in line. India lose their first wicket.

19:12 IST:Good start by Amir. Pitches it up and Rohit looking for the big drive, gets an inside edge.

19:11 IST:Both the Indian openers are out there in the middle. Amir to start things off for Pakistan.

19:07 IST:Pakistan have the bowling to defend this target. With the likes of Amir, Hasan Ali and Junaid Khan in the ranks, Pakistan will be hopeful of winning the final. Can India chase down the target? Only time will tell.

19: 05 IST:Pakistan on the other hand have done their job in the final. Big match and they have the runs on the board.

19:04 IST:India will have to bat out of their skin to chase this target. Ravi Shastri on air reckons that India need to get off to a very good start in order to chase down that mammoth Pakistan total.

19:03 IST:Welcome back to the run-chase here at the Oval

18:38 IST: Bhuvneshwar Kumat to bowl the last over.

18:36 IST: FIFTY! Mohammad Hafeez brings up his half-century off 34 balls.

18:34 IST: High full toss from Bumrah. Umpire signals it as NO BALL. Free hit coming up.

18:16 IST: SIX! Imad Wasim joins the party this time. He stands and lofts the ball straight down the ground for another maximum. Kedar is disappointment.

18:15 IST: SIX! Hafeez comes forward and launches the ball towards long off.

18:11 IST: FOUR! Excellent shot from Hafeez. Full and on the pads from Bumrah. Hafeez picks the ball and sends it towards square leg boundary. Pakistan 276/4 in 43.4 overs.

18:05 IST: WICKET! Kedar Jadhav gets rid of Babar Azam for 46 runs. Azam comes forward to attack Kedar but fails to connect. An easy catch for Yuvraj Singh at long-off. Did you hear the cheer? Yuvi!  Yuvi! Yuvi! Yuvi! all over at The Oval. Pakistan 267/4 in 42.3 overs.

18:00 IST: FOUR! Hafeez slaps the ball over deep mid wicket area for a boundary. Magnificent shot from the batsman. Bhuvneshwar isn't happy with this shot. Pakistan 263/3 in 41.3 overs.

17:56 IST: FOUR!Ravindra Jadeja starts his eighth over. Hafeez sends his towards fine leg for a boundary. Pakistan 257/3 in 41 overs.

#INDvPAK | #Pakistan crosses 250 for the loss of 3 wickets, nervous times for #India fans

17:31 IST: Virat Kohli brings Jasprit Bumrah back into the attack. Can he get another wicket?

17:29 IST: Ravichandran Ashwin ends with figures of 0/70 today - the most conceded by a bowler in the finals of Champions Trophy.

#INDvPak It's GAME ON! Wicket #2 for #TeamIndia - Fakhar Zaman out, c Jadeja b Pandya

17:23 IST: WICKET! Hardik Pandya gets the big fish. The Oval erupts as Fakhar Zaman departs. Incredible innings from the left-hander. He departs for 114 runs. Well judged catch from Jadeja. Pakistan 200/2 in 33.1 overs.

16:57 IST: FOUR! There seems to be no stopping Fakhar Zaman.He moves to 93, inches closer to a maiden ODI century

16:56 IST: Hardik Pandya comes back into the attack

16:50 IST: FOUR!Fakhar Zaman opens the face of the bat and sends Jadeja towards sweeper cover. Pakistan 150/1 in 26 overs.

16:49 IST: FOUR! Fakhar Zaman sends Jadeja towards square of the wicket for a boundary. He moves to 72 runs with this boundary.

16:48 IST: SIX! Fakhar Zaman comes forward and launches the ball over long off area. Magnificent hit from the left-hander.

#INDvPAK | First wicket for #TeamIndia ! Azhar Ali run out for 59

16:40 IST: WICKET!Finally, India get a breakthrough. Azhar Ali is run out for 59 runs. Massive celebration from Indian team. The Oval erupts once again. Pakistan 128/1 in 23 overs.

16:28 IST: FIFTY! Fakhar Zaman brings up his half-century in similar fashion. He hits Jadeja towards deep backward point to complete his half-century off 60 balls. Pakistan 114/0 in 20 overs.

16:26 IST: FOUR! Fakhar Zaman moves to 47 with a superb boundary off Jadeja towards square of the wicket.

16:11 IST: Azhar Ali hits in the air. Catch is the shout but the ball lands safely.

16:06 IST: Another bowling change for India. Ravindra Jadeja comes into the attack. Can he get a breakthrough?

16:02 IST: A loud LBW appeal from Pandya. Umpire turns it down. He is having a discussion with MS Dhoni and Virat Kohli whether to take the review or not. Dhoni says NO.

15:58 IST: Virat Kohli hands over the ball to Ashwin and having a discussion with the off-spinner.

15:47 IST: FOUR!Fakhar Zaman sends Bumrah straight down the ground for a boundary. Excennet footwork from the batsman. Pakistan 62/0 in 10.3 overs.

15:46 IST: Virat Kohli rushes towards Jasprit Bumrah and asks him to bowl.

15:32 IST: Excellent over from Bhuvneshwar Kumar. He concedes just 2 runs off his fourth over. Pakistan 38/0 in 7 overs.

15:25 IST: FOUR! Jasprit Bumrah starts his fourth over. Azhar Ali uses the pace and cuts the ball towards third man for a boundary.

15:22 IST: FOUR! Bouncer from Bhuvneshwar. Fakhar Zaman tries to play a pull shot but ball kisses the helmet and races towards the boundary.

15:19 IST: FOUR! Azhar Ali slaps the ball straight down ground.. What a shot from the right-hander.

15:17 IST: FOUR! Fakhar Zaman tries to hit hard but gets an inside edge. The ball races towards the fine leg.

A game of millimetres!

Fakhar Zaman gets an early life. Can he and Pakistan make India pay? #PAKvIND #CT17 pic.twitter.com/vcAKwc0ozA

15:15 IST: A BIG WICKET for India. Jasprit Bumrah strikes. Wait! Wait!Umpire is checking the NO BALL. Yes, replay shows it is a front foot NO BALL from Bumrah. Fakhar has been asked to stay.

15:11 IST: Fakhar Zaman dabs to cover and takes a quick single. A direct hit and he would have been gone. Excellent attempt from Kedar Jadhav.

15:07 IST: Fakhar Zaman gets an inside edge and the ball races towards fine leg. He will get 1 run.

15:02 IST: India are in a huddle. Captain Virat Kohli is giving some pep talks to the team. Pakistan openers Azhar Ali and Fakhar Zaman are making their way to the middle. Bhuvneshwar Kumar is ready with the ball. Here we go....

14:53 IST: We are just minutes away from the mouth-watering clash at the Kennington Oval. It's India vs Pakistan. Both the teams are ready for thenational anthems.It's sea of blue at The Oval.

14:34 IST: TOSS: India opt to field against Pakistan in the Champions Trophy 2017 final at the Kennington Oval.

India have won the toss and will bowl first in the #CT17 final! #PAKvIND https://t.co/Cer70pIRoh pic.twitter.com/5Jl4N28lf8

14:30 IST: Guys,the wait is over. Both the captains  - Virat Kohli and Sarfraz Ahmed - are in the middle for the toss.

14:28 IST: Team India are in a huddle at the Kennington Oval.

We have come so far. We have showed the world what we are made of. Now let's finish it off with a WIN! #PakvInd #PakistanZindabad.

All spruced up 2 cheer for CT17 Finals. Also excited to present the MiniTrails to the world #JabHarryMetSejal pic.twitter.com/hPZDXz1uFo

13:39 IST: Here's how the fans reacted as the Indian cricket team walked into the stadium.

???? The reigning champions are in the house! #PAKvIND #CT17 pic.twitter.com/kfGjcTbmeK

12:21 IST: Former England captain Michael Vaughan has this to say on the India-Pakistan clash

Great day for Cricket .... #PAKvIND .... Doesn't get any bigger in any Sport .... #ChampionsTrophyFinal

12:15 IST: Believe. Become - Indian team's mantra ahead of the final

11:57 IST: India opener Shikhar Dhawan has some important advice for pacer Jasprit Bumrah ahead of the big final.

What advice did @SDhawan25 have for @Jaspritbumrah93 ahead of his first ICC tournament final? #PAKvIND #CT17 pic.twitter.com/QxGwcIyMXu

11:53 IST: Hello and welcome to our live cricket blog for this Sunday showdown between India and Pakistan.

The form book still overwhelmingly backs India to successfully defend their title, but the manner in which Pakistan contemptuously dismissed favourites England, makes the final that much more absorbing. Even among the Indian team, for all the platitudes being offered about Pakistan's success, there seems to be a defined undertone that this was in the bag. One would do well to defer judgement till well into the second innings.

But India would be confident, for sure. That one loss to Sri Lanka was an aberration that couldn't possibly be the norm. The batsmen have clicked in no uncertain terms. So much so that even a target of considerably over 300 seems quite reachable.

But India would be confident, for sure. That one loss to Sri Lanka was an aberration that couldn't possibly be the norm. The batsmen have clicked in no uncertain terms. So much so that even a target of considerably over 300 seems quite reachable.

Pakistan captain Sarfraz Ahmed would also be looking for some breaks when the sides meet. For one, he'll be hoping that Mohammad Amir is back in action after missing the semi-final.