Meeting Michael Schumacher and experiencing aura around him 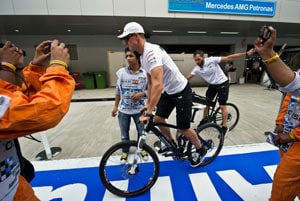 Michael Schumacher has a personality and a shining two-decade career which can have a mesmerising effect on fans. Even us journalists can be left spellbound because after all somewhere deep down, even we are die-hard fans, are we not?

A distance of 6 feet separated us. Now before you get ideas, the second half of 'us' happens to be a certain Michael Schumacher. And that is how far (more like how close!) he was from me during an interaction with the press, at one of the 5 star hotels in the city, a couple of days before the second edition of the Indian Grand Prix.

Infact, the distance must've been less than a feet, when he walked past me, to take his seat in the room that was designated for the press meet. I have to say I'm not one of those who's usually in awe of sportstars. Perhaps the fact that you are there doing a job... waiting for your turn for an interview, instructing your camera person on what visuals you need, and furiously e-mailing away information to office, does that to you. You are not there as a fan, you must not be awestruck.

Also, I dislike taking photographs with big shots, taking autographs from them, and updating my Facebook status every time they do or say something, while I can see them, and am somewhat near them. But I wish, I so wish, I could make an exception and do all of the above, just for Schumi. Michael Schumacher has that aura about him. And unless he's there in person, right there in front of you, you can't quite experience it.

Most events and press meets are pretty badly organised these days. And I didn't expect this one to be an exception. All events in the build up to the Formula One race, last year and this, have been exactly like each other. There are pit girls who welcome you to the event, some with pompoms like cheerleaders for some strange reason, the sound of V8 engines scorching the track being played on a loop on the speakers, and only designated correspondents allowed to ask 'pertinant' questions to the drivers.

By pertinant, I mean topics ranging from new car batteries to real estate, basically the product they're endorsing, and nothing whatsoever about motorsports.

Michael Schumacher (and his Mercedes team-mate Nico Rosberg, who gets massively overshadowed by Schumi), had attended a string of events since morning, that weren't exactly scintillating. Really, how was this going to be any different from those? I mumbled to myself, as I dragged myself into the 5 star, balancing my overstuffed bag and camera tripod, on either shoulder. Surprise, surprise. Once I'd registered myself for what the organisers called 'an exciting evening ahead', I was directed to a room, with a round glass table and some chairs around it. Following is my conversation with one of the event organisers:

"This is where we're supposed to wait? For what? And what time do you think things will start?", I ask, clearly impatient "For Michael? Don't you want to wait here? He'll be here at 7:30 sharp, so set up your camera soon", she replies with calmness, that is rather unusual of people in the PR business "You mean he's going to be here? In this room? Schumacher will be sitting there? As in right there? That chair there?", I ask. By now, impatience has made way for excitement, and a squeaky voice.

"Yes, that chair. So set up your camera soon", she sounds business-like now, checking sponsor backdrops, and audio equipment in the room. 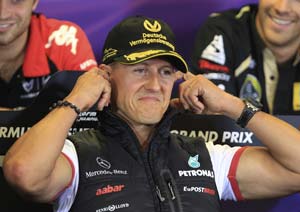 Okay, Michael Schumacher and I are going to be in the same room, albeit with other members of the press. But by the end of it, I'm pretty confident I will be able to even identify what perfume he's wearing. The most vivid image I have of the speed king is from his Ferrari days. Red car, red helmet, and all you can see are his gleaming eyes.

20 minutes or so later, the king (I'm actually very tempted to call him 'dude') of Formula One, makes his entrance. Black velvet blazer, crisp white shirt, grey trousers, and a smile that can kill.

He passes by us (yes yes, me included! We even exchanged 'Good Evening' greetings!), to take his seat. For the next 20 minutes, Michael Schumacher charms the 15 or so of us; organisers, sponsors and journalists included, with his greatness.

His second stint in the sport has been disappointing. Only one podium finish, ever since his return in 2010. But he is Michael Schumacher. There's this air of an achiever about the man that's hard to miss, and he knows he has nothing to prove to anyone.

He wears that greatness with grace, and a sense of humour. We were told, "Michael's not going to take any sports questions", before the event began. Seriously? So he is very handsome indeed, and just a few feet away from me.

I can admire him with jaws almost open for 20 minutes and more. But MS, as some of them are referring to him as, doesn't have any such hang ups about what he's asked. As we found out, he was in a good mood.

The opening few questions are on the Indian Grand Prix, retirement, Sachin Tendulkar. "Who is the next Schumacher? Can anyone fill in your shoes?", asks one journalist. "What is your name? And are you anywhere near getting there?", responds Schumi, pointing fingers to the journalist, with a smile at the corner of his lips.

The entire room bursts out laughing. A voice in my head tells me, "Can you please ask him a question? Why the hell are you here? Just to stare at him?!" I clear my throat, and raise my hand to ask, "Michael, you've been there before, a time when you stopped racing, and you will be there again very soon. What's that like? Being in a place without the sound of the car engines around you, or the smell of rubber burning". "It's quiet, it's peaceful", he laughs, "and to be honest with you, it's not that I missed sitting inside a Formula One car. Just that in 2010, Ross (Brawn) called me, he said he needed me, and I knew I had a mission to complete"

Well, my mission for the day was certainly successful. I had the opportunity to meet a legend, talk to him, and be in absolute awe of him. I watched Usain Bolt run the 100m final at London's Olympic Stadium, a few months back. And I thought, that was it for this year. My quota of being a part of sporting glory and grandeur, was done with, for 2012. Clearly not. Michael Schumacher was dragged away by his manager as soon as 20 minutes were up. None of us got to take photographs or autographs from the great man. I shut my notebook, and all I could come up with was, "Wow! What a star". The only bit of the mission that was left incomplete... I couldn't quite identify what perfume he was wearing.