Luck? 'Superhero' Sebastian Vettel has the moves too! 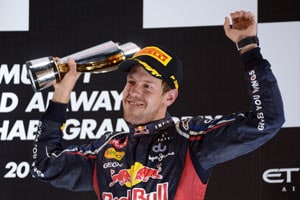 His race at the Yas Marina circuit in Abu Dhabi was epic and while some may call him plain lucky, Vettel showed he has the ability to back his strengths to the hilt, in the face of adversity.

An analysis in rough of Sebastian Vettel's emphatic podium finish underlines the fact that he is a lucky driver. Then, a minute assessment also shows that he is gutsy, crafty and a sensible maniac behind a four-wheeled rampaging Bull.

Going through Sky Sports' lap-by-lap analysis of Vettel's performance in Abu Dhabi - where he began from the last spot - it is interesting to note how fate - yes, we will just say fate for now - played a role in clearing the way for the German driver. The race was like a prolonged scene from a Hollywood blockbuster, like Transporter or Expendables (the first, not the sequel).

Sebastian 'Jason Statham' Vettel first took on the extras and went past them with characteristic ease. He may not have been used to the idea of being in the rear-view mirror of Narain Karthikeyan this early but he soon managed to leave several cars behind albeit minor scratches which in this case were on his front wing. (Luck? No, it is called pace)

The fact that our protegee was helped by Nico Rosberg's early pit-break is also a directorial call, we'll assume.

A slightly bleeding Vettel decides in favour of continuing with his action stunts and kept going. It was at the 14 lap mark that he chose to finally pit and get his machine a new nose and fresh paws.  (Luck? No, it is called planning)

From here on, DRS - the sidekick - came to Vettel's aid and the two went about their business with precision. Di Resta, De La Rosa, Grosjean, Petrov, Glock - Vettel was surging past all. (Luck? No, it is called skill)

By almost the mid-way mark, even the flagging Michael Schumacher had no answer to his younger fellow German in the rear-view mirror. Vettel made the most of what he and his car could do and quickly found himself where few thought he would be, this early into the script race. 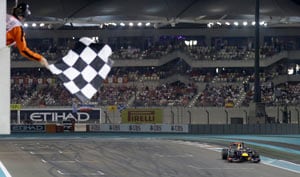 The question though was if his medium tyres could last 40 laps in all. Vettel may or may not have had the answer right then but he kept galloping on that Red Bull until a final pit stop for the much-awaited soft tyres. (Luck? Possible)

It was in the 39th lap that luck rared it's head. Perez and Grosjean created a pile  allowing Vettel to come up behind Jenson Button McLaren, running fourth now. (Luck? For sure this time)

Kimi Raikkonen at the absolute front was racing away in his car and screaming away at his team on the radio. The battle though was for the third spot. Both Vettel and Button had DRS advantage and it was a superb climax.

Button did find some pace and a classic battle erupted lasting all the way until the 52nd lap when Vettel managed to find just the perfect move to go past the Briton and finish to a rapturous applaud from an awe-struck audience. (Luck? No, speed plus style)

For he who may have seen the race at the start and returned with their 'popcorns' towards the end can, mistakenly, adjudge that this here was a an extremely lucky man. Vettel though showed that stunts and skills can combine in real life too and script memorable tales of Formula One folklore.