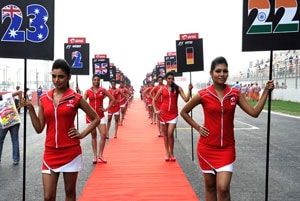 A year on, the much appreciated Buddh International Circuit has only made further strides for an even better setting for the Indian leg of F1. The fact that the title-race is much closer can only increase the adrenaline levels.

A year after 'can they or can't they,' we are back at the Buddh International Circuit. This time, the Indian leg of the Formula One 2012 calender promises to be bigger, better and well, a lot more greener.

Year 2011 was a year of curiosity. There was not much happening in terms of standings. Red Bull's Sebastian Vettel had notched up a superb lead which was never going to be toppled by any of the other drivers. The debut season of Indian Grand Prix then, came about as a welcome repreive for fans who looked for something new and different to read. Of course, after conspiracy-marred Commonwealth Games in 2010, people around the globe doubted whether the Buddh International Circuit could pull it all off. There were some land allotment disputes and some issues with the timely completion but the transition between October and November re-enforced the fact that India had arrived and arrived with a big bang, in Formula One racing.

Sweating for a sensational second

One of the most repeated quotes from last year was when Sebastian Vettel said: People are poor here but are happy!

While this is not about how and what has changed about India's poverty levels since the race here last year, the track itself was praised by all and has only been improved for the 2012 season.

* This is a greener, cleaner track: Increased green cover to reduce levels of dust and mechanised dusters to clean the track
* The length of the kerbs at turn 6, 7, 8 and 9 have been increased from 5 to 15 metres
* The run-off area at turn 10 and 11 of the 5.12 track has been extended by a metre with the gravel replacing the astro-turf.
* All possible intersections have been cordoned off. Remember the dog that came onto the track last year? Well, he won't be getting clicked this year.
* A lot more on offer for fans. Parking space increased to 21,000 from 15,000 and additional bus-service from Noida.
* Individual tickets on sale. Interested only in the race? Don't buy tickets for qualifying then! Also, fun activities promised by the organisers which include live concerts. Britney Spears may also be a part of the events planned. 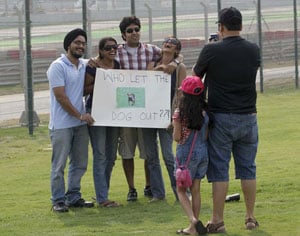 The title at stake, and a lot more

The Indian Grand Prix is not the final race of the year. Yet, it may well prove to be the race that tilts the balance. Two drivers. Two teams and two groups of separate fan base - the Indian Grand Prix will have eyeballs glued to either the track or to television screens come October 28.

Just to put things into comparitive perspective: Vettel had 349 points against Button's 222 coming to Greater Noida last year. This year, the Red Bull driver still is in the lead but this time, it is a gap of just 6 that is between him and Ferrari's Fernando Alonso. There is also a battle raging lower down with Kimi Raikkonen (167), Lewis Hamilton (153) and Mark Webber (152) in a battle of one-upmanship.

Add to the mix the fact that Sahara Force India has managed to finish in single digits in the previous few races and the Indian Grand Prix promises to be a sensational pot-boiler!