Indian F1: If teams had manifestos, the undecided fans would surely be wooed 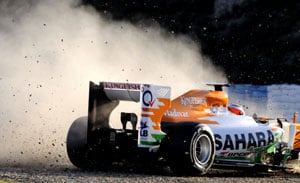 Calling on all casual Indian F1 fans. You are the undecided majority whose support can work wonders for drivers and teams at the Buddh. Here are the manifestos that may help you make up your mind.

A year on, the Indian Formula One fan at large is now aware, knowledgeable and quite well versed in the nuances of apex motorsports racing. The lack of an Indian driver or rather (sorry, Narain) the lack of an Indian driver with teeth though can leave many confused about which team and which driver to cheer for at the Buddh International Circuit. To simplify matters a bit though, here is a run-down of possible sides to back this Sunday...

To the fans at large (and the author will like to repeat this to emphasise this is not for the hardcore F1 fans), the India in Force India does indeed stand for the country and not for American natives. The team is co-owned by our very admired, highly respected Vijay Mallya and has the chakra as part of the liveries. Watch out for the car that has shades of the Indian national flag and that would surely be the team to eke on. Note for Kingfisher Airlines' employees: We wrote eke - not egg, just so we are on the same page here.

It should not matter that the two drivers racing for the team are not Indians. Nico Hulkenberg (German) and Paul di Resta (Scottish) are racers who have made the right choice unlike some other Indian drivers who, according to Mallya in a report last year, choose teams which are slow and therefore can only be felt sorry for.

The team is based in Silverstone (UK) but we can still see a swadeshi tinge to its movement, especially on the Indian track. 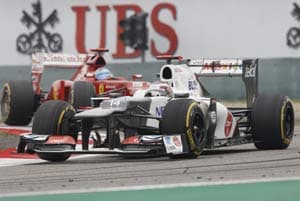 Like Force India, the two drivers racing for this side are not Indians either. Kamui Kobayashi (Japanese) and Sergio Perez (Mexican) are where they are more because of their talents behind the wheel than their nationalities.

The team principal however is a dynamic woman - Dehradun-born Monisha Kaltenborn. In an interview to NDTV recently, she said there is a personal connect that the team shares with India through her and it can help the drivers register a comprehensive performance.

We would just suggest that Sauber is a celebration of Indian women being at the pinnacle. After all, Kaltenborn is the first F1 woman principal ever. So much for the khap panchayats and members of parliament who suggest mobiles phones as evil for women!

This team is possibly the most well known in India. The casual sports fan here can usually come up with the name when asked anything about cars and F1 racing. This year, to support Ferrari though may not be the most patriotic of options.

Ferrari cars are sporting Italian navy flags in support of marines who (allegedly of course) shot dead two Indian fishermen. While F1 boss Bernie Ecclestone has distanced himself from Ferrari's decision saying F1 is apolitical, the flags and the message sent out remains.

Confused? Well, it is something like Indian cricket players sporting pictures of POWs when playing against Pakistan. The difference? It is highly unlikely that our docile nation, team and in fact our inherent nature will ever allow us to be anything but diplomatic. Fans love a legend all over. India is no different.

Michael Schumacher will not return to the country after this race. Well, not as a F1 driver anyway. After dominating the sport for over two decades, the veteran German is possibly more known here than any all the drivers put together.
He recently said that he is overwhelmed by the support shown by Indian fans and the fact that he is racing for the Mercedes GP team means backing this side can be an excellent prospect.

He blazed his way to the chequered flag last year and Sebastian Vettel can stage an encore once again. If being a fan means betting on a particular driver, this German driver may just turn out to be the most reliable option.
His lead against Fernando Alonso (Ferrari) is all of six points and when in action at the Indian Grand Prix, expect him to burn serious rubber.

You are left free to interpret the above as you may.

So, Formula One racing is dynamic and is not subject to national/regional inclinations. The above should only be used, if at all, as a casual guide by the casual fan to support an F1 team, casually. After all, all we seek is that you have fresh perspectives come the second season of the Indian Grand Prix.