Zlatan Ibrahimovic once again proved that age is just a number as he pulled off an incredible bicycle kick in AC Milan's 2-1 win over over Udinese in Serie A on Sunday. 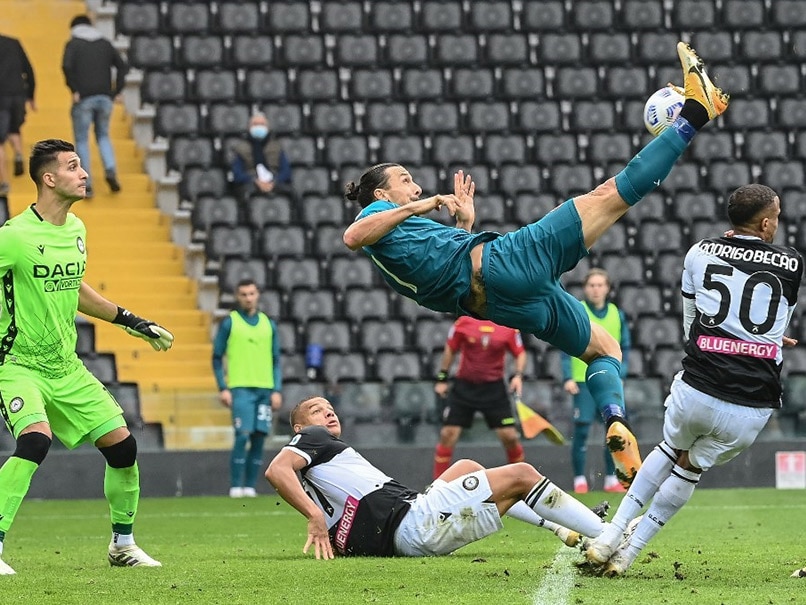 Zlatan Ibrahimovic has scored many a crazy goals in his glittering career but few expected him to be strutting his stuff at the ripe old age of 39. Well, he is doing just that. The Swedish superstar once again proved that age is just a number as he pulled off an incredible bicycle kick in AC Milan's 2-1 win over over Udinese in Serie A on Sunday. His stunning winner helped AC Milan maintain their position at the top of the Serie A table, with points from six games -- four ahead of defending champions Juventus.

What a goal from Zlatan Ibrahimovic.......this guy is just too much!!! pic.twitter.com/fXKGVSZLVg

Ibrahimovic has already scored seven goals in four league games this season. He started the match by setting up Franck Kessie, who scored the opening goal for Milan in the 18th minute.

However, Udinese equalised early in the second half after being given a penalty.

The game seemed to be headed for a 1-1 draw, but Ibrahimovic had other ideas. The 39-year-old striker scored with an overhead kick with just seven minutes remaining to give his team all three points.

AC Milan are now unbeaten in 24 matches since returning in June from the coronavirus lockdown.

Meanwhile, record champions Juventus welcomed back Portuguese star Cristiano Ronaldo, who had tested positive coronavirus. Ronaldo made an instant impact on his return, scoring a brace to give Juventus a 4-1 win against newly-promoted Spezia.

The champions ended a run of three consecutive draws to momentarily move second in Serie A, four points behind leaders AC Milan.

Later in the day, Sassuolo leapfrogged Juventus to reclaim second place in the Serie A table, two points behind Milan, after a 2-0 win over Napoli, their first ever win at the Stadio San Paolo.