England cricket chief Tom Harrison said the looming restart of the lucrative Indian Premier League had no part to play in the dramatic cancellation of the fifth Test between England and India on Friday. 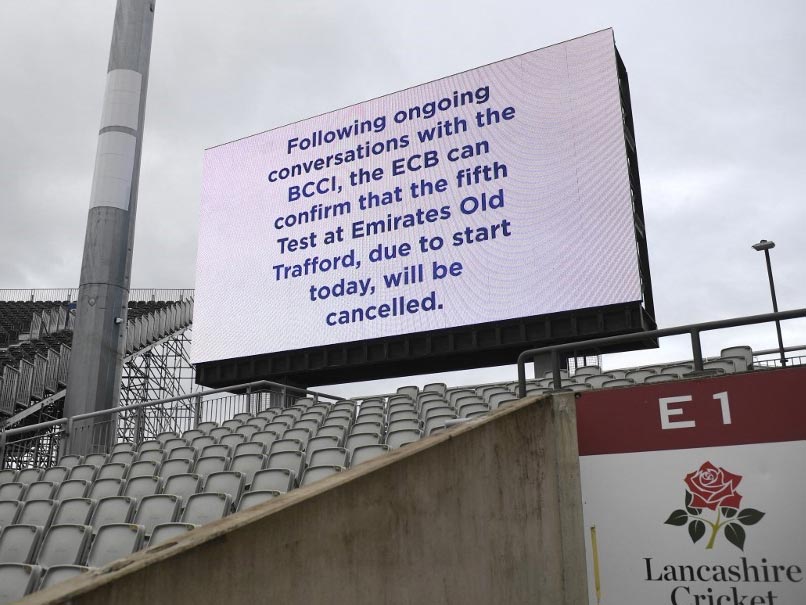 The 5th Test match between India and England was cancelled on Friday.© AFP

England cricket chief Tom Harrison said the looming restart of the lucrative Indian Premier League had no part to play in the dramatic cancellation of the fifth Test between England and India on Friday. The final game of an absorbing series was called off just over two hours before the scheduled start at Old Trafford because of coronavirus concerns within the Indian camp after a number of positive tests among backroom staff. Rescheduling the Test is complicated by the lucrative Indian Premier League Twenty20 tournament, which resumes in the United Arab Emirates on September 19.

The IPL, which started in India, was suspended due to the coronavirus pandemic earlier this year.

Former England captain Mike Atherton told Sky Sports: "The real issue in the room is the IPL....The players are concerned about their involvement in that and the BCCI (Board of Control for Cricket in India) is no doubt concerned about that tournament."

But England and Wales Cricket Board (ECB) chief executive Harrison dismissed the link with the IPL.

"Let me be super-clear about this -- I don't think the IPL has got anything to do with this," he said. "This is not a situation which has been created by a rescheduled IPL. I fundamentally do not believe that for a second."

The status of the Old Trafford match -- and with it the fate of the series, which India were leading 2-1 -- appears uncertain after the ECB retracted an initial statement that India had "forfeited" the game.

COVID-19 is an acceptable reason for cancelling a match under the regulations for the World Test Championship if it has a significant impact on a side's ability to field a team.

"I think we have to just take a breath and, obviously, do some work with the ICC (International Cricket Council) to formally ask them to adjudicate on the result of this," said Harrison.

"Obviously I think you'll be aware that BCCI offered to reschedule the match, which is good news.

"I think at this point we are looking forward to making sure that we can reschedule this match at some point in the near future.

"And then, we separately have ICC adjudicate over whether this series is completed now and needs to be effectively whether that fifth match is null and void or whether it's actually regarded as something else, a forfeiture or something else."

Harrison said he did not believe the cancellation, which could cost the ECB millions of pounds in lost revenue, could be regarded as solely due to the coronavirus.

"This is not a Covid cancellation," he said. "This is a match cancelled because of serious concerns over the mental health and wellbeing of one of the teams.

England Cricket Team England vs India, 2021 Cricket England vs India, 5th Test IPL 2021
Get the latest updates on IPL Auction 2023 and check out  IPL 2023 and Live Cricket Score. Like us on Facebook or follow us on Twitter for more sports updates. You can also download the NDTV Cricket app for Android or iOS.