"You Are Getting Older", Ziva Reminds MS Dhoni On His 37th Birthday

Despite losing the 2nd T20I against England, the Indian camp was in celebration mode as MS Dhoni celebrated his 37th birthday. 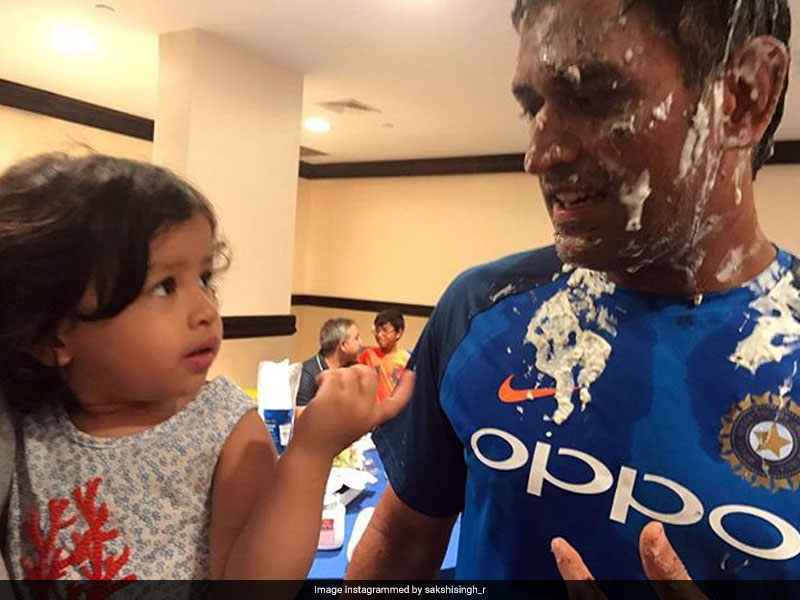 Mahendra Singh Dhoni rang in his 37th birthday alongside his India teammates and his family on Saturday. In a video that has been posted by the official Twitter handle of the BCCI, everyone from Virat Kohli to Dhoni's daughter Ziva can be seen sending their wished to the former India skipper. Ziva, who is extremely close to her father, teased the wicket-keeper batsman that he is getting older. Dhoni's wife Sakshi, in an Instagram post, expressed her emotions towards her husband and credited the wicketkeeper-batsman for 'teaching her about life in the past 10 years'.

Watch the video till the end.

SPECIAL: From his teammates to someone very very special, wishes galore for @msdhoni as he celebrates his 37th birthday. Watch it till the end - Cuteness Alert! #HappyBirthdayMSDhoni
LINK---->https://t.co/wT27zi4Bx1 pic.twitter.com/YPupnjLVwz

"Happy Bday to you ! Even words wont do justice to how you are as a human being ... 10 years i have learnt a lot from you ... and continue to .. thank u for making me see and deal with life in a straightforward practical way," she wrote as caption with a photo of the two together, in which Dhoni was seen covered in cake.

Happy Bday to you ! Even words wont do justice to how you are as a human being ... 10 years i have learnt a lot from you ... and continue to .. thank u for making me see and deal with life in a straightforward practical way .. .. Lot's of love n also thank u for making my life so beautiful !

On the eve of his 37th birthday, when Dhoni came out to bat in the second T20I against England in Cardiff, he became the third Indian cricketer to play 500 international matches. The two other Indian players to have achieved the feat are Sachin Tendulkar and Rahul Dravid with 664 games and 509 matches respectively.

Dhoni made his India debut back in 2004 in an ODI against Bangladesh and has played 318 matches since then. The right-handed batsman has accumulated 9967 runs in the ODIs so far. Famous for his lightening glovework, he has taken 297 catches and has been involved in 107 stumpings. While Dhoni is still a part of the limited overs side, he retired from the longest format of the game in 2014.

Dhoni is also the only captain in the history of cricket to win three ICC trophies. India first lifted the inaugural World T20 in 2007 under his captaincy and then won the ICC World Cup 2011. India followed the 2011 World Cup win with a victorious triumph in 2013 Champions Trophy. Dhoni stepped down as limited-overs captain in January 2017.

Virat Kohli England vs India, 2018 Cricket England vs India, 2nd T20I
Get the latest updates on IPL 2021, check out the IPL 2021 Schedule and Indian Premier League Live Score . Like us on Facebook or follow us on Twitter for more sports updates. You can also download the NDTV Cricket app for Android or iOS.