Kuldeep Yadav is likely to be that one bowler who makes a big difference in the Test series. 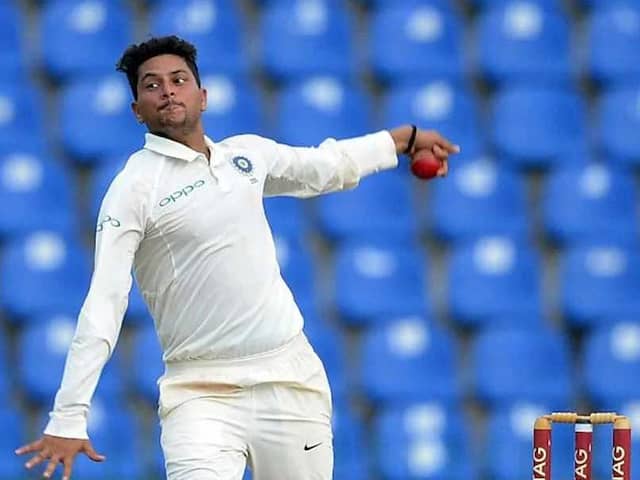 The English cricketers would be going an extra yard in handling the left-arm wrist spin of Kuldeep Yadav when they take on India in the five-Test series, beginning on August 1. The chinaman bowler was quite the mystery element during the limited-overs series but while the English batsmen did manage to tackle him with some effect towards the later stages of white-ball cricket, he may well make a telling difference with the red ball.

"Even at home, the conditions are going to be different in every game you play. So you have to adapt to those conditions as quickly as possible. We have seen with Kuldeep Yadav that there is still an element of surprise, at least in white ball cricket.

"It is not all about watching footage. It is also about who adapts to those conditions the best, who is the most patient in Test cricket, who is the most skilful. And generally, people who are more patient and skilful are on top in the end," Anderson told PTI.

While the Ashes remain the pinnacle of Test cricket for James Anderson "like any Englishman", showdowns against India also rank pretty high as the world No.1 side brings out the absolute best in him -- the 2012 away series being a case in point.

"We have played against South Africa when they were number one in the world and that was a good test, and India is exactly the same for me," Anderson said.

"2012 was one of the best series I have ever played in, for me, in India. As a seam bowler, you go to India and everyone says that the spinners will take wickets so you want to prove to people that you can succeed in those conditions," he said.

"So for me that was a really proud series of my career. You always want to play against the best and do well against the best. That always inspires me to try and push myself and play as well as you can.

Anderson had played a starring role in England's 2-1 series win in India back in 2012, with 12 scalps in four matches. The pacer, who boasts of 540 wickets in 138 Tests, said that victory was on par with many of his Ashes performances.

"I think there has always been a good healthy rivalry between India and England. Every series I have played in, whether it was one-day or Test cricket, it has always been really competitive and a really high standard of cricket," he said.

"For me, for an Englishman, the Ashes, it is the pinnacle. If you ask the Australians, they will probably say the same (laughs). It is the biggest series in Test cricket, the one that you look forward to the most and the one that you want to win at any cost. But for me, playing against the best teams is also what you want to do.

Anderson said he is looking forward to challenging himself against India and the onus would be on England's senior players to perform.

"So that's exactly how we will prepare for this series. We want to go into this series in as good a form as possible and be as fit as possible, because we know that if we play well, we have a good chance of winning," Anderson said.

After England's 1-1 draw with Pakistan in May, Anderson was given six weeks off from cricket to recover from a shoulder injury ahead of this series. The pacer has recuperated in time, and played for Lancashire's second-eleven against Nottinghamshire last weekend.

He took 2-32 from 14 overs in a game scheduled specifically to aid his comeback, and will now feature for Lancashire against Yorkshire this coming weekend.

"My preparation has been really good. I have done a lot of work in the gym and have been bowling a lot in the last couple of weeks to try and get my fitness up. There is also a championship game against Yorkshire this weekend and so yes, I am excited to get back playing. It has been a while since the last Test against Pakistan, so I am feeling refreshed and looking to go again," Anderson said.

Anderson said India versus England is one of the key rivalries in world cricket.

"I think we found it harder the last time in 2016, because in 2012 we had two great spinners in Monty Panesar and Graeme Swann, who made the seamers' job a lot easier.

"It meant that you could come on for a quick four-over spell and give it your all knowing that you have those quality spinners coming on after. We didn't have that quality when we went back there in 2016, which made it a little bit more difficult for us," he added.