Virat Kohli Is The "Worst Reviewer In The World", Says Michael Vaughan

Virat Kohli got both his review calls wrong early in England's second innings. 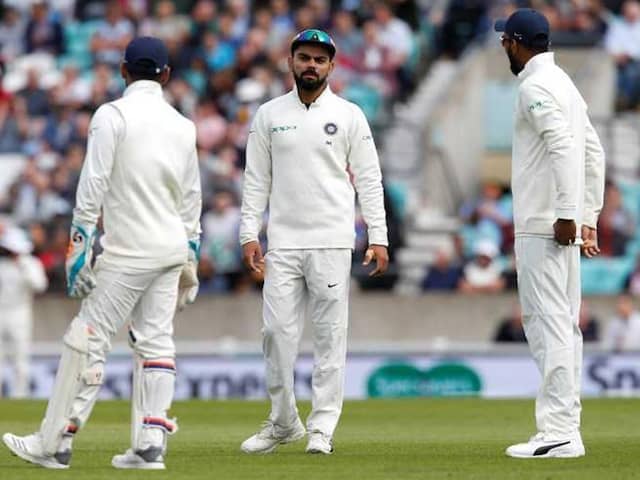 Michael Vaughan has called Virat Kohli the worst reviewer in the world.© AFP

Former England captain Michael Vaughan called Virat Kohli the worst reviewer in the world on Sunday. Indian skipper Virat Kohli had taken two reviews during England's second innings during the fifth and final Test being played at The Oval, London. Both the DRS calls didn't go India's way and the visitors ultimately lost both of them. Michael Vaughan later took to Twitter to make his feelings heard. "Virat is the best Batsman in the World .. #Fact .. Virat is the worst reviewer in the World .. #Fact #ENGvsIND", he captioned.

The first incident took place in the 10th over (9.2 overs) when England opener Keaton Jennings was hit on the pads off Ravindra Jadeja's delivery. A review was taken and replays suggested the impact was outside off. The Hawk Eye later showed the same as the ball was tossed up outside off.

The second incident came to light in the 12th over (11.6 overs). Alastair Cook was hit on the pads off Jadeja's delivery. Kohli yet again decided to go for a review. The impact was again outside the off stump as Cook was caught on his back-foot as he looked to cut but missed it completely. The ball struck on the back-thigh which was well outside off.

India currently trail England 1-3 in the three-match series. India lost the first Test at Edgbaston by 31 runs and the second Lord's Test by an innings and 159 runs. The visitors pulled one back after a 203-run victory over England at Trent Bridge. However, India lost the fourth Test at Southampton 60 runs giving the hosts an unassailable 3-1 lead.

Virat Kohli Michael Vaughan England vs India, 2018 England vs India, 5th Test Cricket
Get the latest Cricket news, check out the India cricket schedule, Cricket live score . Like us on Facebook or follow us on Twitter for more sports updates. You can also download the NDTV Cricket app for Android or iOS.