The victory cut England's lead in the five-match series to 2-1. 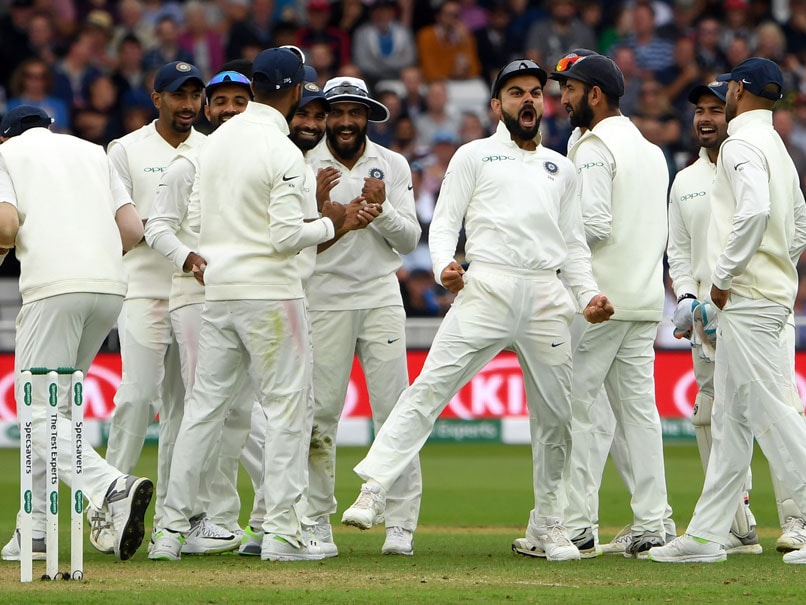 India beat England by 203 runs in the third Test at Trent Bridge on Wednesday to cut the home side's lead in the five-match series to 2-1. England, set a mammoth 521 to win, were bowled out for 317. The fourth Test starts at Southampton on August 30. Play on Wednesday lasted just 17 balls after England resumed the fifth day on 311 for nine, the match ending when Ravichandran Ashwin had England No 11 James Anderson caught by Ajinkya Rahane at slip - the first wicket for an India spinner in this fixture.

The match was a personal triumph for India captain Virat Kohli who made 103 in his side's second innings 352 for seven declared following his first-innings 97.

England, whose captain Joe Root won the toss and fielded, slumped to 161 all out in their Hardik Pandya's five for 28 the medium-pacer's maiden five-wicket haul in Test cricket.

They suffered another top-order slump in a second innings where they had to make cricket history to pull off an improbable win - no side have made more in the fourth innings to win a Test than the West Indies' 418 for seven against Australia at St John's, Antigua in 2003.

England were in dire trouble at 62 for four before a stand of 169 between Jos Buttler, whose 106 was his maiden Test century, and Ben Stokes (62) kept India at bay.

But the recalled India fast bowler Jasprit Bumrah then took three wickets for eight runs in five balls on his way to innings figures of five for 85 in 29 overs to leave England on the brink of defeat.

This win kept alive India's hopes of becoming just the second team, after a Don Bradman inspired Australia in 1936/37, to win a five-match Test series from 2-0 down.

It also represented a remarkable turnaround following their innings and 159-run loss in the second Test at Lord's.

"The victory was much needed at this stage of the series and to have a performance like that, which was so clinical in all three departments, is something that was pleasing to me as a captain," said Kohli at the presentation ceremony.

"The players are really proud of what they've done in this Test too. Everyone is taking responsibility at the right time," he added.

Root admitted England's first-innings batting had let them down.

"It's fair to say that we very much underperformed in that innings," he said. "You look at the second innings and the partnership between Buttler and Stokes and that's a real lesson to our side in how to play Test match cricket.

"Not the fact that they scored at a slower rate or looked to be more defensively minded, but the way they adapted to the situation and were very clear about how they were going to score their runs," Root added.

The fourth Test at Southampton starts on August 30.

England Cricket Team Trent Bridge, Nottingham England vs India, 2018 Cricket England vs India, 3rd Test
Get the latest updates on ICC Women's Cricket World Cup 2022 and IPL 2022, check out the Schedule , Live Score and IPL Points Table. Like us on Facebook or follow us on Twitter for more sports updates. You can also download the NDTV Cricket app for Android or iOS.