Velocity defeated Supernovas by five wickets after being handed a target of 127 runs, to get their campaign in the Women's T20 challenge off to a winning run. 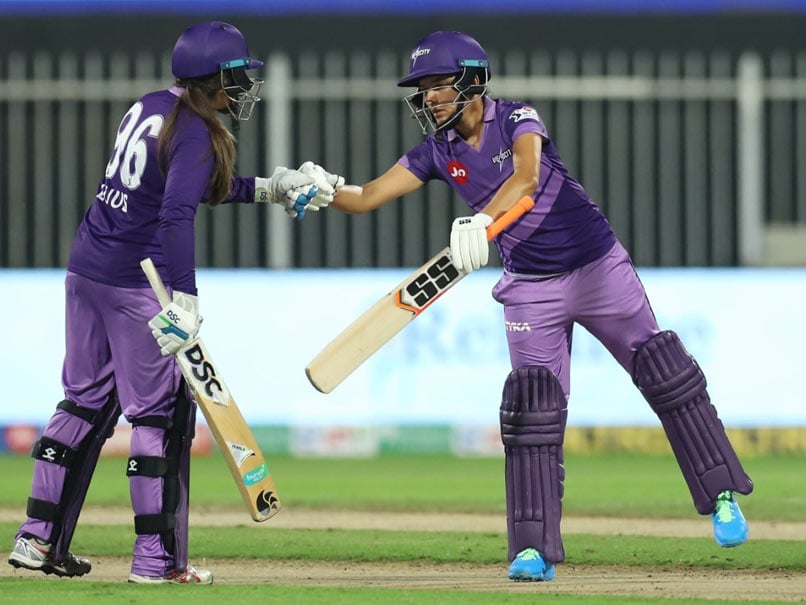 A fine 51-run partnernship between Sushma Verma and Sune Luus helped Velocity get across the line.© BCCI/IPL

Velocity defeated Supernovas by five wickets in the first match of the Women's T20 challenge in Sharjah on Wednesday. Velocity skipper Mithali Raj won the toss and opted to bowl. Supernovas openers Priya Punia and Chamari Athapaththu stitched a steady partnership of 30 runs in 5.2 overs, before the former was dismissed by New Zealand pacer Leigh Kasperek. New batswoman Jemimah Rodrigues failed to make much of an impact, departing for just seven runs off eight deliveries. The arrival of skipper Harmanpreet Kaur helped bring some stability to the innings, with the batswoman stitching a partnership of 47 runs alongside Athapaththu.

However, the latter's dismissal proved to be a massive blow for the Supernovas. Shashikala Siriwardene, the new player in stitched a brief partnership of 22 runs alongside Kaur which seemed vital in the context of the game. However, Kaur's crucial dismissal threw the innings into a state of chaos with the rest of the batswomen unable to make much of an impact. The Supernovas finished their innings with a score of 126 runs for the loss of eight wickets, with Atapattu (44) finishing as the highest run-getter. Spinner Ekta Bisht was the pick of the bowlers, accounting for three wickets. She received further support from Jahanara Alam and Kasperek who picked two wickets apiece.

The Velocity chase started off on a poor note, with English opener Danni Wyatt dismissed for a duck. Shafali Verma and skipper Mithali Raj soon followed her back to the pavilion, following cheap dismissals. However, a fine 29 from Veda Krishnamurthy alongside Sushma Verma, helped lend some much-needed stability at this stage.

Sushma continued to attack despite Veda's dismissal, stitching a crucial 51-run partnership alongside South African cricketer Sune Luus. Luus was the star of the night for Velocity, smashing 37 runs off 21 deliveries, helping the side get across the line in 19.5 overs following Sushma's dismissal. Ayabonga Khaka was the highest wicket-taker for the Supernovas, accounting for two wickets. Radha Yadav, Poonam Yadav and Siriwardene picked a wicket apiece respectively.

Comments
Topics mentioned in this article
Harmanpreet Kaur Mithali Raj Cricket Veda Krishnamurthy
Get the latest updates on IPL Auction 2023 and check out  IPL 2023 and Live Cricket Score. Like us on Facebook or follow us on Twitter for more sports updates. You can also download the NDTV Cricket app for Android or iOS.