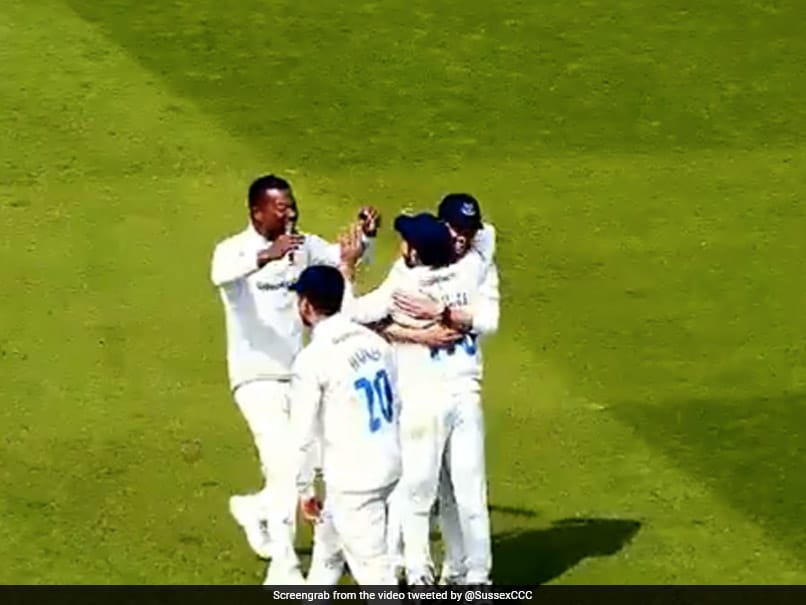 Pakistan wicketkeeper-batter Mohammad Rizwan is enjoying a successful stint in the English County Championship with Sussex. Rizwan, who made his Sussex debut alongside veteran India Test batter Cheteshwar Pujara, made headlines after taking a stunning catch during the ongoing tour match between Sussex and New Zealand. On the second delivery of the 54th over of the Kiwi's innings, Delray Rawlins bowled a slightly fuller delivery to Hamish Rutherford, who came down the track and tried to smash it over long-off for a six.

However, Rutherford mistimed it and Rizwan, who was deployed at mid-off, ran back nearly all the way to long-off and took a stunning diving catch.

"WHAT. A. CATCH. Is there anything @iMRizwanPak can't do?" the video was shared by Sussex on their official Twitter handle.

It is to be noted that Rizwan was not a part of Sussex's playing XI and came in as a substitute fielder.

After the first day was washed out due to rain, the visitors won the toss and elected to bat against the hosts at the Hove.

Tom Latham and Will Young scored fifties before both of them retired on scores of 65 and 55, respectively.

The New Zealand declared their innings at 342 for three on the stroke of stumps.

The Kiwis are in England to play three Tests against the Three Lions, starting with the first Test on June 2.

After the conclusion of the ongoing tour match, the New Zealand will also play a four-day practice match against the First-Class Counties XI from May 26-29 at Chelmsford.

Pakistan Cricket Team Mohammad Rizwan Cricket
Get the latest updates on ICC T20 Worldcup 2022, check out the Schedule and Live Score. Like us on Facebook or follow us on Twitter for more sports updates. You can also download the NDTV Cricket app for Android or iOS.