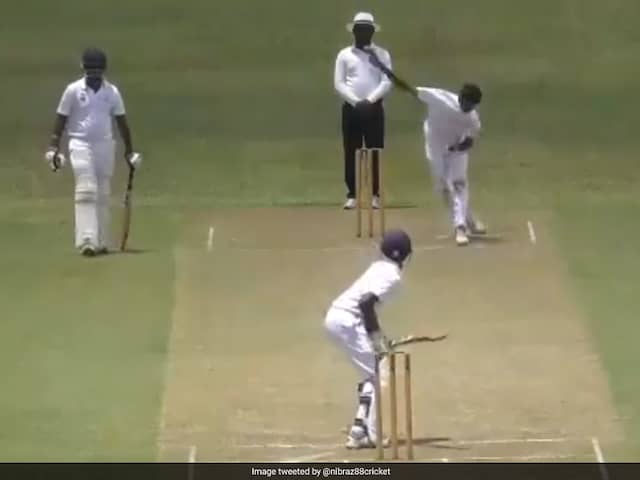 Lasith Malinga has been one of the greatest servants of the Sri Lankan cricket for over a decade now. His fierce bowling, which includes inch-perfect yorkers, have tormented numerous batsmen from across globe. However, with increasing age Malinga's pace has reduced and people have started talking that he is not that effective as he once used to be. Lasith Malinga has already hung his boots in One Day Internationals (ODIs) and Test cricket that has created has created a void in the Sri Lankan team which is hard to fill. However, when a video of a Sri Lankan teenager bowling toe-crushing yorkers with Malinga-like slingy action went viral on social media, the fans started claiming that the island-nation has found Malinga's replacement.

Here is the video everyone is talking about:

Posting the video on Twitter, a user identified the bowler as 17-year-old Matheesha Pathirana who was making his  for his college -- Trinity College, Kandy.

Former Sri Lanka skipper Kumar Sangakkara is also an alumnus of the same college and seems like the college has a habit of producing excellent cricketing talents.

In the video, the teenage prodigy can be seen dismissing six batsmen. The user mentioned that the young bowler ran through the opposition, picking up six wickets conceding just seven runs.

Last time when Malinga took field in a T20I match against New Zealand he ran through their top-order, picking up four wickets in four balls. He returned with the career-best figures of 5/6, helping Sri Lanka clinch a solitary win in the three-match series which they lost 1-2.

This was not the first time Malinga had achieved this feat in international cricket. He had first achieved the same feat in a 50-over World Cup contest against South Africa in 2007.

While it is too early to say if the World has found Malinga's replacement or not, there is no denying the fact that his action and toe-crushing yorkers do remind one of Sri Lanka's current T20I captain.