India struck early with the new ball by removing Soumya Sarkar after India declared the Indian innings with the score on 687 for 6 with tons from Murali Vijay, Virat Kohli and Wriddhiman Saha. 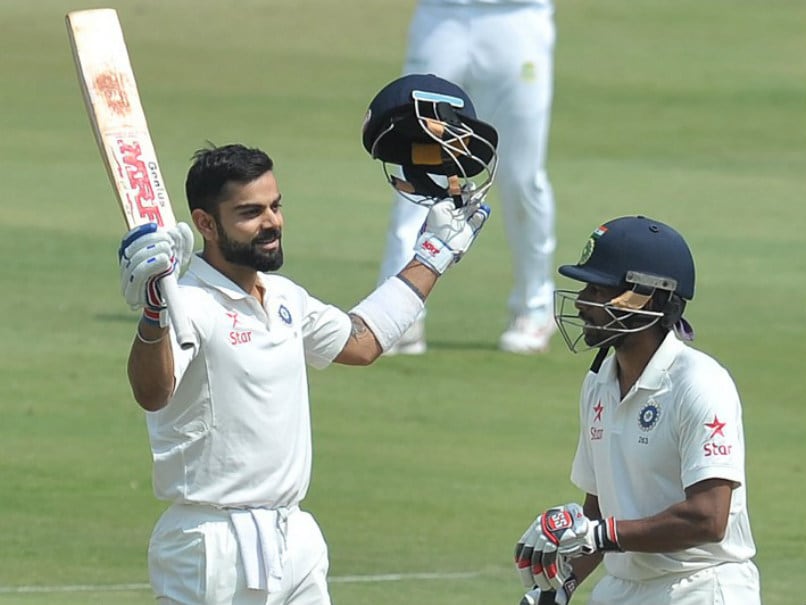 Bangladesh were up against it after India had set them a huge first-innings total to tackle. They were in trouble early as Umesh Yadav removed Soumya Sarkar (15) in his very first over. But the visitors managed to see off the first fourteen overs of their innings without any further damage with Tamim Iqbal (24) and Mominul Haque (1) at the crease. India had earlier declared their innings at 687 for 6. Bangladesh are 41 for 1 at the end of the second day's play.

Earlier, India started off from where they left after the first day's play as Virat Kohli and Ajinkya Rahane piled on the runs in the first hour of the second day's play. The Indian captain looked in ominous touch right from the first ball as Bangladesh found it difficult to get their field right. Rahane gave good support to Kohli as the duo soon took India past the 400-run mark.

The Indian captain started the proceedings by hitting two back to back boundaries of Taskin Ahmed as Bangladesh found it difficult to choke the flow of runs. Rahane soon got into the act as he brought up his fifty by hitting Shakib Al Hasan with a swat over mid-on as India found themselves in the driver's seat.

Rahane survived a scare as Sabbir Rahman failed to grab a tough chance at point but that didn't cost Bangladesh much as the stylish Mumbai-born soon departed with his score on 82. He played away from his body, bringing the short cover into play and Mehedi Hasan Miraz hung on to a difficult chance.

Saha, who is making a comeback after a thigh strain ruled him out of much of the remainder of the England series, Bangladesh had at last broken through a 222-run stand between Kohli and Rahane.

All the happenings at the other end didn't deter Kohli from scoring his fourth double century and becoming the only player to score a double-century in four consecutive series. Don Bradman and Rahul Dravid had both compiled double-tons in three consecutive series. During his innings, Kohli also registered the most Test runs in a home season, breaking Virender Sehwag's previous record of 1,105 in 17 innings.

The fairy-tale came to an end with Kohli getting dismissed on 204 in his attempt to play a late cut off Taijul Islam and that left Saha and the lower middle-order to take India past 650.

Ravindra Jadeja used the long handle to good effect. The left-hander brought up his fifty off 68 balls and eventually remained unbeaten on 60 with Saha (106*) at the other end.

Comments
Topics mentioned in this article
India Cricket Team Bangladesh Cricket Team Virat Kohli Cricket Rajiv Gandhi International Stadium, Hyderabad
Get the latest updates on ICC T20 Worldcup 2022 and CWG 2022 check out the Schedule, Live Score and Medals Tally. Like us on Facebook or follow us on Twitter for more sports updates. You can also download the NDTV Cricket app for Android or iOS.