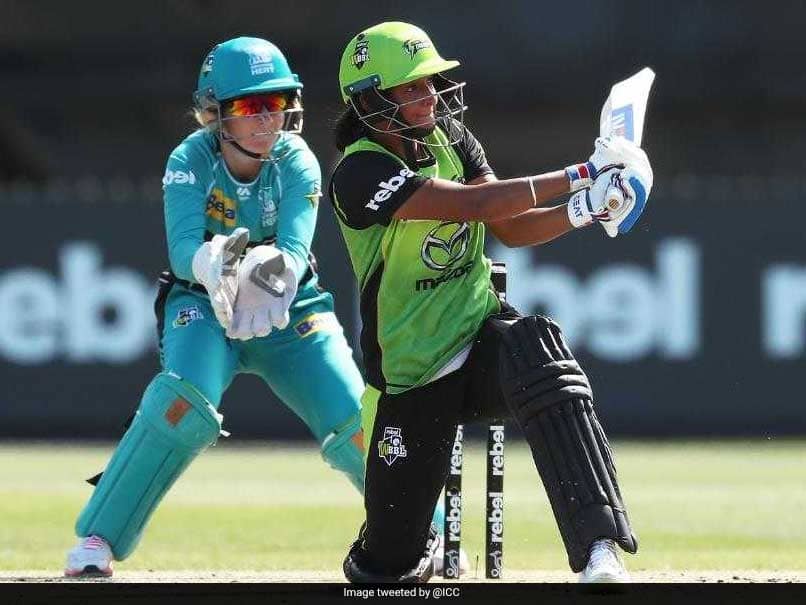 Harmanpreet Kaur was recently involved in a spat with Mithali Raj.© ICC/Twitter

Harmanpreet Kaur continues to make headlines as she wreaked havoc during a Women's Big Bash League clash between Sydney Thunder Women and Brisbane Heat Women at the North Sydney Oval on Sunday. Coming in to bat at No.3, Harmanpreet smashed her way to a 26-ball 56, a knock that comprised six boundaries and three sixes at a strike rate of 215.38. The blitzkrieg ensured Sydney Thunder eventually beat Brisbane Heat by 28 runs. A video of the knock was posted on Twitter by Cricket Australia. Watch:

Harmanpreet Kaur was all class in her knock of 56 off 26 balls in today's #WBBL04 clash at North Sydney Oval! pic.twitter.com/1SZLWnlAHW

Harmanpreet had recently extended her association with Sydney Thunder and will continue to represent them while Smriti Mandhana had been lapped up the by Hobart Hurricanes. Harmanpreet was the top scorer for Thunder in the second season. She had amassed 296 runs from 12 innings with an average of 59.20 and was adjudged Thunder's Player of the Tournament during that edition. Mandhana, on the other hand, previously appeared for Brisbane Heat in the second edition of the WBBL.

Harmanpreet has also been in the news for her widely discussed tiff with Mithali Raj. The T20 captain had dropped Mithali for the ICC World T20 semi-final against England, which India went on to lose. The move raised eyebrows in cricketing circles, subsequently snowballing into a controversy that dragged the Board of Control for Cricket in India (BCCI) and the Committee of Administrators into the exchange.

India Women Harmanpreet Kaur Mithali Raj Smriti Mandhana Cricket
Get the latest updates on IPL 2020, check out the IPL Schedule for 2020 and Indian Premier League (IPL) Cricket live score . Like us on Facebook or follow us on Twitter for more sports updates. You can also download the NDTV Cricket app for Android or iOS.