Glenn Maxwell's men finished on 132/7, losing the first ever all-Melbourne BBL final by 13 runs at the end of the near two-month tournament. 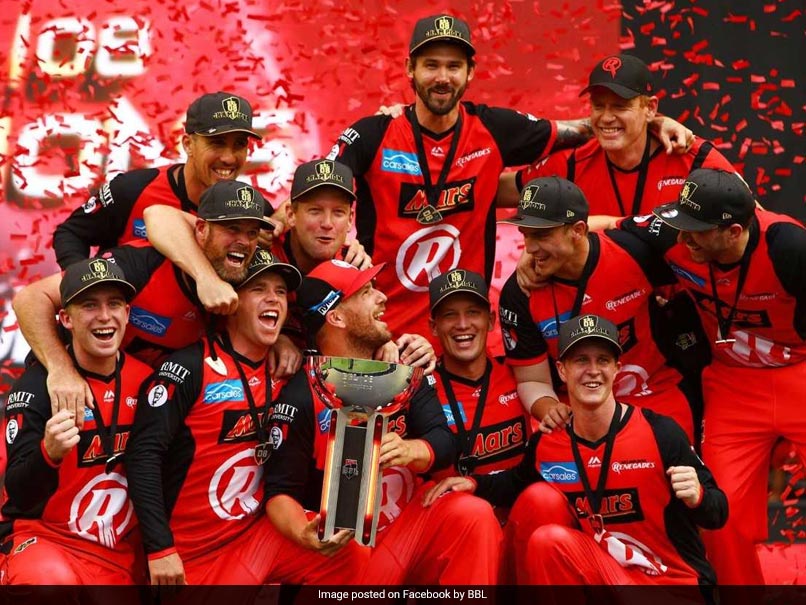 Aaron Finch's Melbourne Renegades clinched their first Big Bash League title Sunday after city rivals the Stars imploded during a tense run chase. Chasing 146 to win at Docklands Stadium, Glenn Maxwell's men were 93 without loss and cruising before losing an incredible seven wickets for 19 runs. They finished on 132 for seven, losing the first ever all-Melbourne BBL final by 13 runs at the end of the near two-month tournament.

"It's unbelievable," said Finch. "I thought when we got (Ben) Dunk caught and we had two new batters in we had a chance. It's a wicket that was so hard to chase runs on, that's why I was happy to bat first.

"The boys just executed well under pressure. Very special to win in front of our home fans," he added.

After some tight bowling to restrict the Renegades, the Stars signalled their intentions early with left-hander Dunk smacking a boundary off the first ball of the innings from Kane Richardson.

But he and fellow opener Marcus Stoinis weren't taking any chances, knowing that wickets in hand could be vital in the final overs.

Instead, they picked off runs when they could to keep the scoreboard ticking over coupled with some extravagant shots, including a Dunk six off Cameron Boyce and Stoinis smashing an even bigger one down the ground from the same bowler.

Dunk brought up his 50 off 38 balls with a four before Stoinis finally fell for 39 after 93-run stand, bowled by Boyce to spark the incredible collapse.

Test batsman Peter Handscomb came to the crease but only lasted two balls and then Dunk holed out to Dan Christian off Boyce for 57 before Maxwell was out for one.

Nic Maddinson followed for six and then Seb Gotch for two. Dwayne Bravo was the next to go for three.

It turned the game on its head and there was no way back for the Stars.

"We played some great cricket this tournament, to fall short at the end is disappointing," said a gutted Maxwell.

"Hopefully we win it next year. Congratulations to Renegades, we've had some great tussles. To my boys, I've asked a lot of you and you've delivered in spades."

Test opener Marcus Harris clubbed 12 runs off Jackson Bird's first four balls but he then rashly went for another big hit and top-edged to wicketkeeper Handscomb.

The tenacious Bird, recalled to the side in place of all-rounder Evan Gulbis, struck again in his next over to take an easy catch off his own bowling and send Sam Harper packing for six, leaving the Renegades struggling.

Veteran Cameron White joined Aaron Finch and they took 11 off spinner Adam Zampa's first over before the Renegades skipper was out in bizarre fashion for 13 just as he was hitting his stride.

White hit a straight drive and it deflected off bowler Bird's boot to hit the stumps, with Finch stranded outside his crease, leaving the Renegades 47 for three off six overs.

When White went soon after for 12, lbw to Zampa, they were in big trouble, managing just 65 runs by the halfway mark.

The pace was picked up over the final 10 overs with Christian, their semi-final hero, and Tom Cooper sharing an 80-run unbroken partnership to push the total into respectable territory, with the 29 runs bludgeoned from the last two overs proving vital.

Cooper ended on 43 not out and Christian was unbeaten on 38.

Glenn Maxwell Cricket
Get the latest updates on IND vs NZ 2021, check out the Schedule and Live Score . Like us on Facebook or follow us on Twitter for more sports updates. You can also download the NDTV Cricket app for Android or iOS.