Steve Smith was castigated by the English media and fans for supposedly "mocking" Jack Leach by wearing spectacles during the Australian celebrations after they won the 4th Test and retained the Ashes. 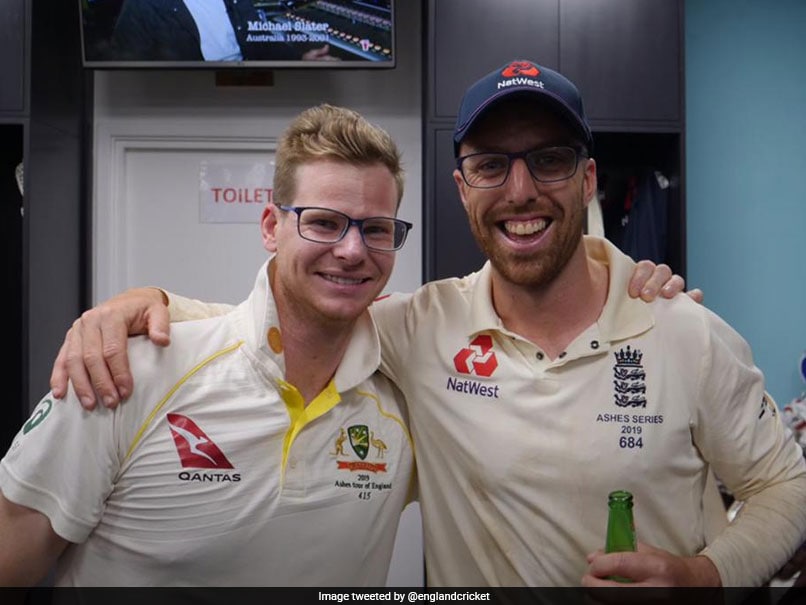 Steve Smith and Jack Leach brought an end to the "spectacles" controversy after England defeated Australia by 135 runs in fifth Test at The Oval, to draw the Ashes 2019 series 2-2 on Sunday. After Australia won the fourth Ashes Test in Manchester to retain the Ashes urn, a bespectacled Steve Smith was seen making funny faces during the celebration in viral photos on the Internet. Many fans assumed that he was mimicking and mocking England's Jack Leach, who grabbed a lot of attention for wearing glasses during the five-match series.

According to various reports in the English media, the 30-year-old Australian was also seen shadow batting left-handed in the "middle of a team huddle".

However, the former Australia captain rubbished the controversy on Sunday as he posed for a picture, that too in glasses, with an "all-time great" bespectacled Leach.

An all-time great - and Steve Smith

Some fans reacted on the post with amazement that how the players didn't care about the stories that were making rounds on internet.

"So you're telling the media hyped up a non-story that the players themselves didn't care about? Surely not..." a user replied to the tweet.

So you're telling the media hyped up a non-story that the players themselves didn't care about? Surely not...

Smith made a remarkable comeback to Test cricket after serving a 12-month ban for his involvement in the ball tampering in South Africa in March 2018.

The 30-year-old batsman scored 774 runs at an average of 110.57, including three hundreds and three half-centuries. With this, Smith broke his previous record of most runs in a Test series in the 21st century. He had previously scored 769 runs against India in 2014-15.

Steven Smith Jack Leach The Ashes 2019 Cricket
Get the latest updates on ICC T20 Worldcup 2022, check out the Schedule and Live Score. Like us on Facebook or follow us on Twitter for more sports updates. You can also download the NDTV Cricket app for Android or iOS.