Australia are seeking their first Ashes series win in England for 18 years. 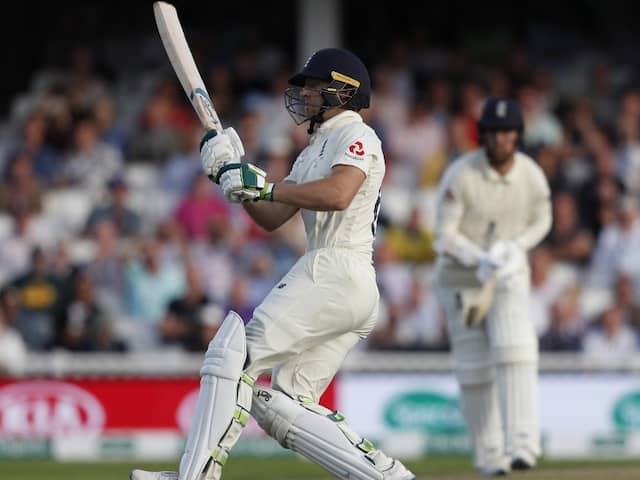 Jos Buttler, who did not look comfortable early on, ended Day 1 on 64 not out.© AFP

Jos Buttler saved England's blushes on Thursday, counter-attacking against Australia to lift his side to 271-8 after they collapsed on the opening day of the fifth Ashes Test. World Cup winners England, desperate to level the series at 2-2, have struggled to find consistency all series and contributed to their own downfall at the Oval, slipping from 170-3 to 226-8. But Buttler, who did not look comfortable early on, dipped into his white-ball playbook, smashing paceman Josh Hazlewood for successive sixes as Jack Leach dug in at the other end. Buttler ended the day 64 not out, while Leach was unbeaten on 10 but England will need to add runs on Friday on what looks like a good pitch for batting.

Australian all-rounder Mitchell Marsh claimed four wickets on his return to the side. Pat Cummins and Hazlewood were again impressive for the tourists.

Australia are seeking their first Ashes series win in England for 18 years.

Australia captain Tim Paine won the toss and put the home side in under grey skies. Joe Root then  enjoyed astonishing good fortune as England reached 170-3.

The skipper was dropped three times but failed to make the most of his let offs, comprehensively bowled for 57 by Cummins shortly after tea.

Root has reached fifty 61 times in Tests but has gone on to reach three figures on just 16 occasions.

By contrast, Australia's former captain Steve Smith, who has dominated the Ashes with his bat, has reached fifty 52 times and made 26 hundreds -- a far better conversion rate.

Root was dropped on 24 by Peter Siddle on the boundary. Then wicketkeeper Paine failed to cling on to a one-handed chance in front of David Warner at first slip. Both drops were off Cummins.

Shortly after lunch, with the ground now bathed in sunshine, the skipper had yet another reprieve when a diving Smith failed to hold on to a sharp chance at second slip off Siddle.

Root drove Hazlewood square of the wicket to bring up 7,000 Test runs in his 158th innings -- only three England players have reached the mark faster. But he eventually ran out of lives.

Bairstow's dismissal brought all-rounder Sam Curran to the wicket and he hooked Cummins for six.

Curran had a let-off when he was given out lbw to Cummins only for a replay to show the Australian had overstepped but he was out shortly afterwards, caught by Smith at second slip off a reckless drive.

Earlier, opener Rory Burns (47) and Ben Stokes (20) were guilty of throwing their wickets away with misjudged shots as England's top order struggled again.

Australia won at Old Trafford last week to take a 2-1 lead in the five-match series, meaning they will retain the Ashes urn regardless of the result at the Oval.

But Paine said his side were "very hungry" to complete the job and win their first Test series in England since 2001.

Jos Buttler The Ashes 2019 Cricket England vs Australia, 5th Test
Get the latest Cricket news, check out the India cricket schedule, Cricket live score . Like us on Facebook or follow us on Twitter for more sports updates. You can also download the NDTV Cricket app for Android or iOS.