David Warner came up with an epic response to the Edgbaston crowd who were heard chanting "he's got sandpaper in his hands". 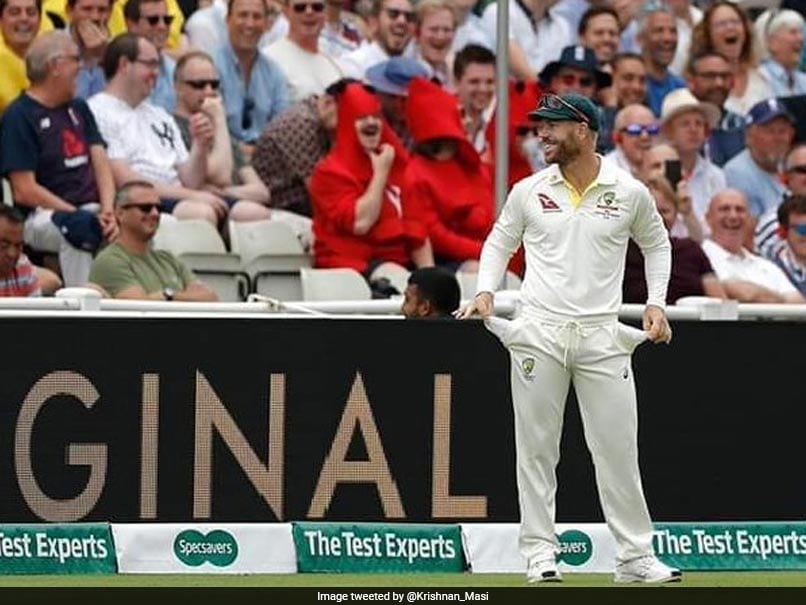 David Warner turned his pockets in reply to "sandpaper" chants from the Edgbaston crowd.© Twitter

David Warner and Steve Smith received a hostile reception from the English fans during the World Cup 2019 and that continued with Australia taking on hosts England in the first Ashes Test at Edgbaston. Cameron Bancroft joined the Australian squad for the Ashes and opened the batting with Warner in the first Test that began on August 1. All three were heavily booed by the English fans and while Steve Smith's brilliant century momentarily silenced the boo boys, things didn't change for Warner, who continued to receive a lot of stick. The left-hander hadn't reacted to the chants but on Saturday came up with an epic response to the Edgbaston crowd who were heard chanting "he's got sandpaper in his hands".

With David Warner stationed at the boundary, the English fans took the opportunity to make their voices heard but would not have expected Warner's response. As chants of "he's got sandpaper in his hands" rang out, Warner opened his palms to show he wasn't holding anything and then even turned his pockets, much to the spectators' amusement.

Warner might have won over the Egbaston crowd with his actions, but with the bat in hand, he yet again failed to make an impact for his team.

After managing just two runs in the first innings, Warner was sent packing for eight by Stuart Broad as Australia were left hoping for another major innings from Steve Smith.

When bad light cut short the third day's play, Australia were 124-3 in their second innings -- a lead of just 34 runs.

Former captain Smith, who had made a superb 144 in the first innings of his first Test since completing a 12-month ban for his role in last year's ball-tampering scandal in South Africa, was 46 not out.

Travis Head was 21 not out, with the pair's stand worth 49 runs.

Steve Smith Cameron Bancroft The Ashes 2019 England vs Australia, 1st Test Cricket
Get the latest updates on ICC T20 Worldcup 2022 and CWG 2022 check out the Schedule, Live Score and Medals Tally. Like us on Facebook or follow us on Twitter for more sports updates. You can also download the NDTV Cricket app for Android or iOS.