"I'm Quite Lethal": Virat Kohli Makes Light Of His Bowling Skills Ahead Of India vs New Zealand Semi-Final

Virat Kohli is leading India into the World Cup 2019 first semi-final against New Zealand, to be played in Manchester on Tuesday. 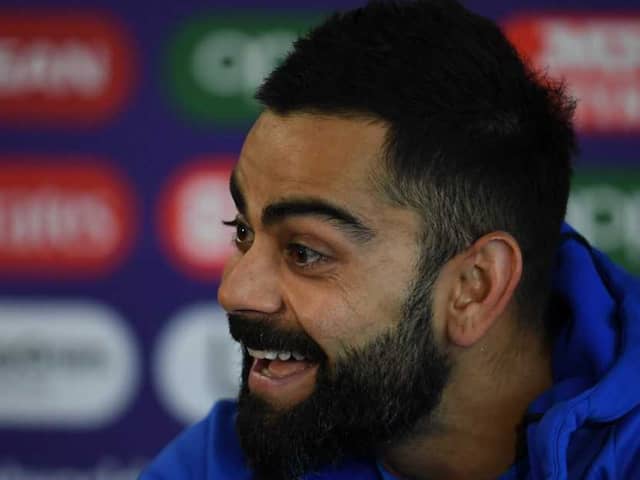 Virat Kohli looked in a relaxed mood as he attended the pre-match press conference.© AFP

Virat Kohli looked in a relaxed mood as he attended the pre-match press conference ahead of the India vs New Zealand World Cup 2019 semi-final. The two teams will clash in the first last-four match to be played at Old Trafford in Manchester on Tuesday. While Virat Kohli spoke about important issues and plans that the Indian team has for the semi-final, the Indian skipper also decided to have some fun. In the press conference, Virat Kohli was reminded that he had dismissed Kane Williamson in the 2008 U-19 World Cup, to which he said: "I can bowl. I can bowl anytime you know. I'm quite lethal, as long as I don't slip on the pitch."

Kohli's take on his own bowling not only brought about a wide grin on his face but the journalists present at the press conference could also be heard laughing.

The Indian captain addressed other important issues as well.

New Zealand have relied heavily on skipper Kane Williamson and veteran bat Ross Taylor to get runs in World Cup 2019, and Kohli made no bones about dismissing the duo quickly.

"Kane Williamson is controlling the tempo of the match, every game. He is the main guy along with Ross (Taylor). Getting Williamson and Ross out early will be important for us," said Virat Kohli.

India, whose league stage match against New Zealand was washed out, have suffered just one defeat in World Cup 2019 so far, against hosts England, and ended on top of the 10-team table, making them strong favourites to beat the Black Caps.

New Zealand, who qualified for the semi-finals in fourth place on the basis of net run-rate, have lost their last three games -- against Pakistan, holders Australia and England.

Kane Williamson World Cup 2019 India vs New Zealand, 1st Semi Final Cricket
Get the latest Cricket news, check out the India cricket schedule, Cricket live score . Like us on Facebook or follow us on Twitter for more sports updates. You can also download the NDTV Cricket app for Android or iOS.