Rohit Sharma had an exceptional World Cup 2019 with five centuries, the most by any batsman in one World Cup. 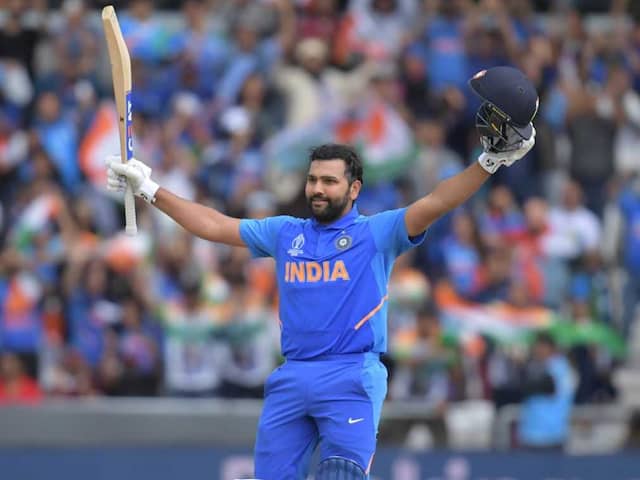 Rohit Sharma was at his very best in World Cup 2019.© AFP

India opener Rohit Sharma, who was the leading run-scorer in World Cup 2019, was included in International Cricket Council's list of five special batsmen list on Tuesday. Rohit Sharma amassed 648 runs in nine innings with five centuries for India in the showpiece event. He averaged 81 in the tournament. Rohit Sharma's hard work, however, went in vain as India were ousted in the first semi-final after suffering an 18-run defeat to New Zealand in Manchester.

ICC's Cricket World Cup Twitter handle shared a video with a caption, "These five batsmen were pretty special at #CWC19."

These five batsmen were pretty special at #CWC19 pic.twitter.com/vSt5A95sfg

Apart from Rohit Sharma, Australia opener David Warner, who ended up one run short of Rohit, was also in the list, followed by Shakib al Hasan, Kane Williamson and Joe Root.

Warner made a solid comeback after ball tampering controversy and scored 647 runs in 10 innings at an average of 71.89 for Australia. He helped captain Aaron Finch in providing breezy start to Australia.

Bangladesh all-rounder Shakib Al Hasan was at his very best in the recently concluded World Cup 2019. He was promoted up in the batting order and the move turned fruitful for Bangladesh with Shakib averaging decent 86.57 in the tournament.

After scoring 606 runs in eight innings, he was the third highest run scorer in the list, even though Bangladesh did not play after the league stage.

New Zealand skipper Kane Williamson led his team to the final of World Cup 2019. He showed character and scored 578 runs in 9 innings at an average of 82.57 for New Zealand.

Joe Root yet again proved his batting prowess and scored 556 runs in 11 innings at an average of 61.78 for England.

Rohit Sharma World Cup 2019 International Cricket Council Cricket
Get the latest Cricket news, check out the India cricket schedule, Cricket live score . Like us on Facebook or follow us on Twitter for more sports updates. You can also download the NDTV Cricket app for Android or iOS.