The parachute team handed the official match ball of the World Cup 2019 final to the umpires. 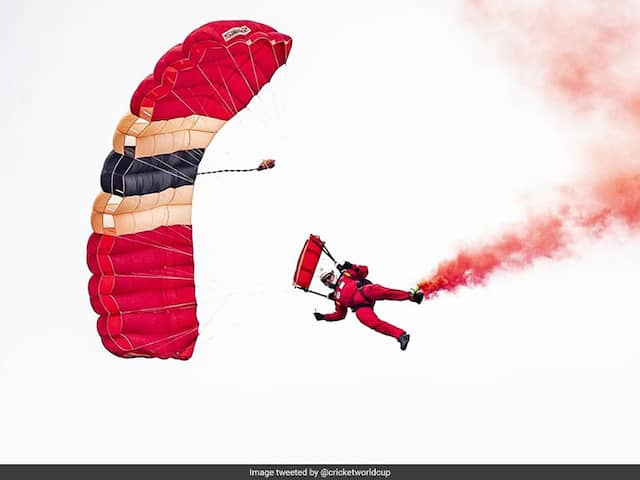 A few members of the Red Devils, the British Army's Parachute Regiment display team, delivered the official match ball of the World Cup final 2019 between New Zealand and England at Lord's in London on Sunday. The Red Devils, one after another, landed at Lord's on their parachute and handed over the match ball to the umpires for the title clash. As they arrived at the final venue, fans cheered them in large numbers and clapped for the daredevils.

New Zealand and England are vying for their first World Cup title in the final at Lord's. The 2015 World Cup runners-up came agonisingly close on getting their hands on the trophy but lost to Australia. While England have reached the final for the first time after 1992.

Both the teams lost three matches each in the World Cup 2019 league table, with England finishing a place above New Zealand.

New Zealand and England are fielding the same playing XI as they did during their semi-finals win.

"We're having a bat. Tough decision. A bat-first surface, but the overhead conditions do make it confusing. We have a job first up with the bat. We're playing the same team. The semi was a tough scrap for both sides, but we're happy we got across the line in that game," New Zealand captain Kane Williamson, who opted to bat said at the toss.

However, England captain Eoin Morgan was not disappointed on losing the toss in the final.