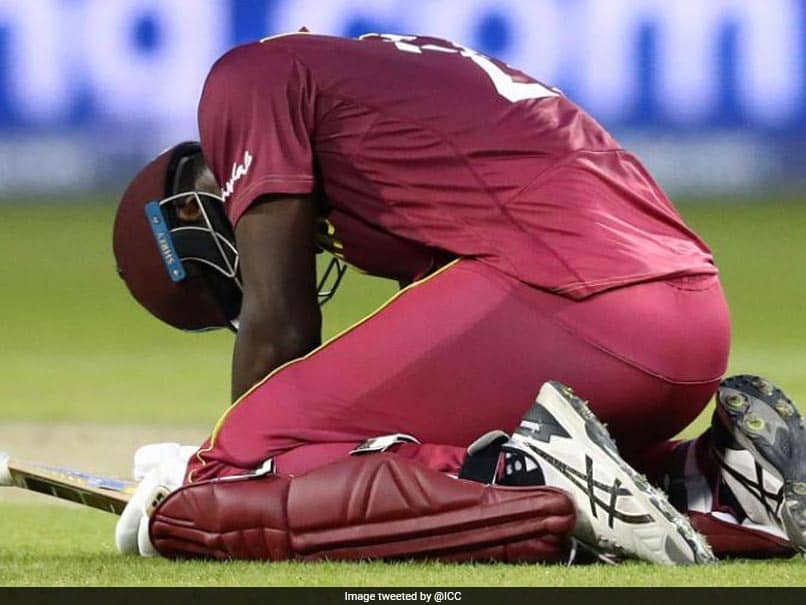 Carlos Brathwaite's impressive ton brought West Indies close to a famous victory in Manchester over New Zealand at the World Cup 2019 match on Saturday. But with six needed from seven balls, Carlos Brathwaite launched Jimmy Neesham for what he hoped would be the winning hit, only for Trent Boult to take a superbly judged catch just inside the long-on boundary as New Zealand clinched the thriller by five runs. The dismissal came as a shock to the West Indies batsman as he sank to his knees in despair after falling for 101 off just 82 balls, including five sixes and nine fours, having dominated a last-wicket stand of 41 in which he scored all the runs.

Senior New Zealand player Ross Taylor, captain Kane Williamson, Neesham all walked to Braithwaite and consoled him for his fabulous effort, which is well documented by the International Cricket Council (ICC) in a video posted on their twitter account.

The video also shows the New Zealand fans in shock alike the many West Indies fans present at Old Traford.

You just have to see it to believe it!!!

An all or nothing catch in the deep by Trent Boult is the difference between winning and losing a @cricketworldcup classic.

The agony
The ecstasy

Victory saw New Zealand return to the top of the table and all but secure their place in the semi-finals as a heart-breaking defeat left the West Indies on the verge of elimination.

Table-toppers New Zealand will next take on Pakistan, followed by Australia and England in their league matches.

Carlos Brathwaite Cricket
Get the latest updates on India vs Australia Series, check out the India vs Australia Schedule for 2020-21 and Ind vs Aus live score . Like us on Facebook or follow us on Twitter for more sports updates. You can also download the NDTV Cricket app for Android or iOS.