Victory saw New Zealand return to the top of the World Cup points table but the heart-breaking defeat left the West Indies on the verge of elimination. 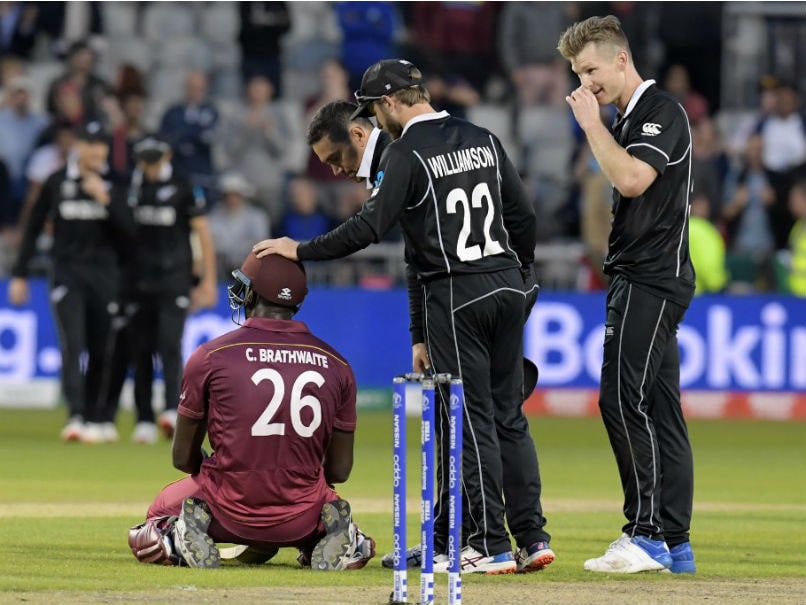 But with six needed from seven balls, Brathwaite launched Jimmy Neesham for what he hoped would be the winning hit, only for Trent Boult to take a superbly judged catch just inside the long-on boundary.

Brathwaite sank to his knees in despair after falling for 101 off just 82 balls, including five sixes and nine fours, having dominated a last-wicket stand of 41 in which he scored all the runs.

Victory saw New Zealand return to the top of the table and all but secure their place in the semi-finals as a heart-breaking defeat left the West Indies on the verge of elimination.

But he eventually holed out during a collapse that saw five wickets lost for 22 runs in 28 balls.

Stand-in opener Hope, batting up front after Evin Lewis was unable to partner Gayle after being off the field injured for most of New Zealand's innings, played on to Boult for just one -- the first wicket of an excellent 4-30 in 10 overs for the pace bowler.

Gayle was first dropped on 15 when Boult floored a desperately difficult chance off Matt Henry as the ball dropped over his shoulder.

He was next reprieved on 58 when Henry dropped a routine chance at deep square leg off Mitchell Santner, with the spinner again denied Gayle's wicket in the same over when Colin Munro was unable to cling on at deep midwicket.

Gayle's luck ran out when he hoisted Colin de Grandhomme to the long-on boundary where Boult held a safe catch.

Shimron Hetmyer made 54 but couldn't press on and when Kemar Roach edged Henry to wicket-keeper Tom Latham, West Indies were 211-8.

But then came a dramatic rally, with the game turned on its head by a stunning 48th over from Henry that yielded 25 runs.

Brathwaite flat-batted a straight six and next ball he hit an extraordinary one-handed six, the ball flying over backward point and the batsman breaking his bat in the process.

But armed with a new bat, Brathwaite smashed a full toss straight over long-off for another six and then top-edged a four before scoring a single to keep the strike.

Brathwaite then hit Neesham for two to complete a century.

Earlier, New Zealand were 7-2 inside the first over after Sheldon Cottrell removed openers Martin Guptill and Munro for golden ducks.

But Williamson's second successive World Cup hundred after a match-winning 106 not out against South Africa on Wednesday -- took New Zealand to a competitive total.

Williamson went to his 13th one-day international hundred with his eighth four when he pulled a loose ball from fast bowler Kemar Roach.

Sheldon Cottrell World Cup 2019 West Indies vs New Zealand, Match 29 Cricket
Get the latest updates on IPL 2021, check out the IPL 2021 Schedule and Indian Premier League Live Score . Like us on Facebook or follow us on Twitter for more sports updates. You can also download the NDTV Cricket app for Android or iOS.