Mohammed Shami delighted the fans with his antics on field during India's emphatic 125-run victory over the West Indies at Old Trafford. 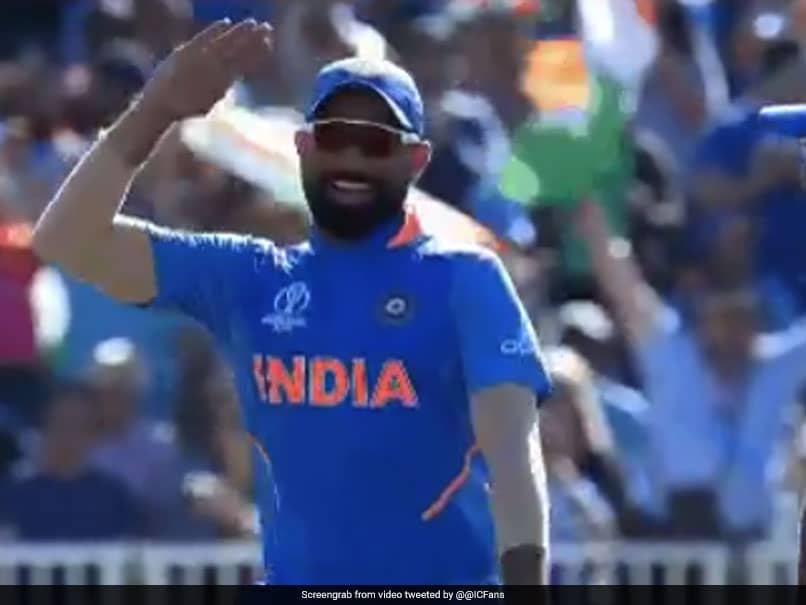 Mohammed Shami impressed in his second consecutive World Cup match, claiming four wickets in India's emphatic 125-run victory over the West Indies at Old Trafford in Manchester on Thursday. Besides taking the social media by storm with his bowling, Mohammed Shami also delighted the fans with his antics on field. Mohammed Shami was seen imitating Sheldon Cottrell's march and salute celebration after the tail-ender was trapped LBW by spinner Yuzvendra Chahal in the 30th over. The video went viral on Twitter within no time, with fans left in awe of the match-winning fast bowler.

Shami posted an incredible impression after missing India's first four matches at the World Cup 2019. He made his first appearance in India's fifth league stage match against Aghanistan in Southampton, where he finished 4/40.

Shami improved his bowling even further and finished 4/16 in the subsequent World Cup match.

Talking about dismissal of Gayle that gave India the required confidence early in the fifth over, Shami credited the Indian Premier League (IPL) for his success.

"Chris Gayle and I were together during the IPL. Once you play, you get an idea. The one thing that I thought was that if I didn't allow him to open his arms, then it would be good because at some stage, he would go for it," Shami said as quoted by the ICC.

Shami came into the playing XI in the absence of the injured Bhuvneshwar Kumar.

Chris Gayle
Get the latest updates on India vs Australia Series, check out the India vs Australia Schedule for 2020-21 and Ind vs Aus live score . Like us on Facebook or follow us on Twitter for more sports updates. You can also download the NDTV Cricket app for Android or iOS.