The trio of Rohit Sharma, Ravindra Jadeja and Kedar Jadhav were enjoying their ride from London to Cardiff on the team bus when suddenly Rohit started interviewing Kedar. 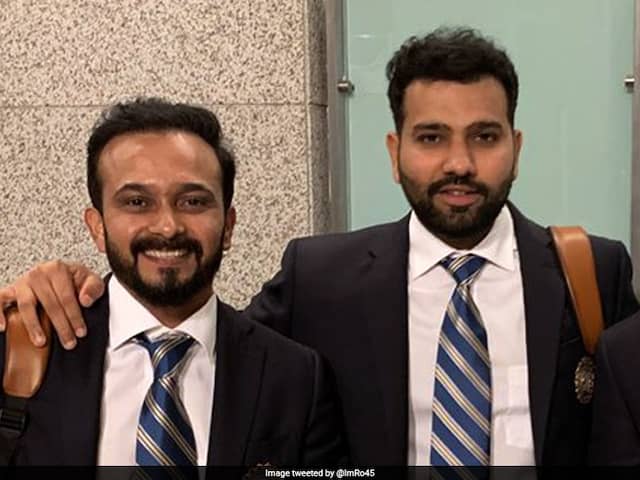 Rohit Sharma posed some questions to Kedar Jadhav regarding the movie "Race 4".© Twitter

The Indian cricket team is currently in the United Kingdom, preparing for the all-important 50-over ICC World Cup 2019. India might have lost their opening World Cup 2019 warm-up game to New Zealand but ahead of their second warm-up game against Bangladesh, they seemed to be in high spirits. The trio of Rohit Sharma, Ravindra Jadeja and Kedar Jadhav were enjoying their ride from London to Cardiff on the team bus when suddenly Rohit Sharma dropped a big hint that Kedar Jadhav might have a role to play in the Bollywood movie 'Race 4'. As of now, there has been no official confirmation regarding the 'Race 4' film by either the producer Ramesh Taurani or Race 3 lead actor Salman Khan who also co-produced the movie.

Rohit Sharma, on his official Instagram handle, posted a video of him having some fun with Jadeja and Jadhav in the team bus. The Mumbai Indians captain started by congratulating Ravindra Jadeja for his gritty half-century for India against New Zealand, which helped bring some respectability to India's total in the warm-up match.

The conversation soon shifted Kedar Jadhav and Rohit had a very direct question to ask him: "Jaddu ke sath mein baithe hai hamare naye Race 4 ke actor. Kedar, humne suna hai aapko Race 4 mein kuch offer kiya hai, special appearance ke liye ya aur kuch? (Next to Jaddu is our new Race 4 actor. Kedar, we have heard that you have been offered something in Race 4, a special appearance or something)"

To which Kedar Jadhav replies: "Haan. Abhi tak finalise hua nahi hai. Hum log baat kar rahein hain uss pe. Hopefully after four months, there will be a surprise for you guys. (Yes. Nothing has been finalised yet. We are in talks)"

Rohit Sharma could not hide his delight and said: "Oh yes. We can't wait for it. All the best for that."

Here is the entire video. See for yourself:

The Indian team will be taking on Bangladesh at the Sophia Gardens in Cardiff. This will be their final warm-up game before their opening match against South Africa on June 5.

The World Cup 2019 gets underway on May 30 with the first game slated to be played between hosts England and South Africa at the Kennington Oval in London.