"Come On India": Leander Paes Cheers For Team India From The Stands At Old Trafford

Leander Paes was present at the stands in Trafford for the India vs Pakistan World Cup 2019 clash. 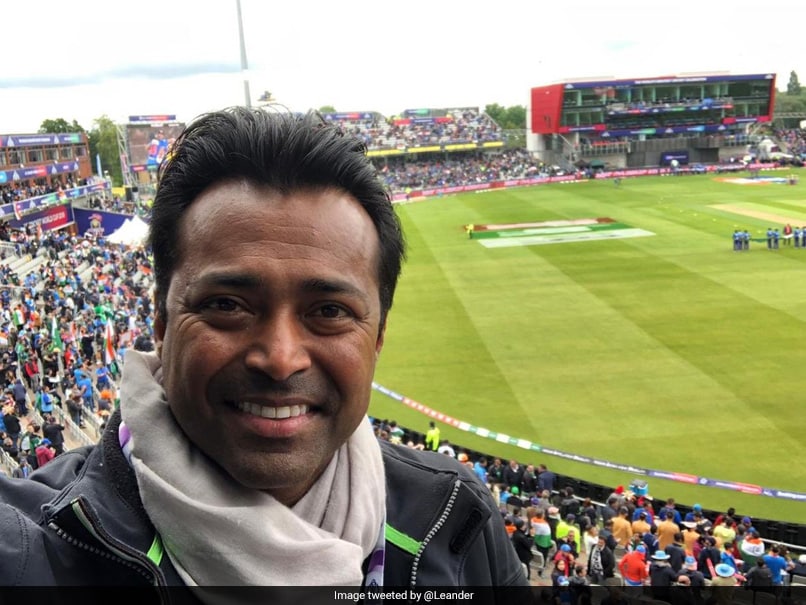 Leander Paes, ace Indian tennis player, turned out for Team India's marquee World Cup 2019 clash against Pakistan. Among a sea of fans wearing the Indian jersey, Leander Paes was also present at the stands in Old Trafford, Manchester on Sunday. The 2015 Australian Open mixed doubles champions posted his pictures on Twitter and said "Come on India!"

The India vs Pakistan World Cup 2019 coincides with Father's Day and anticipating both the events, Shah Rukh Khan tweeted a picture with his son Aryan and said, "Ready for the match with the spirit of #FathersDay. Go India Go!!

The India vs Pakistan World Cup 2019 clash started at the scheduled time without any rain delay. Pakistan captain Sarfaraz Ahmed decided to give his bowlers first use of a green-tinged pitch in a crucial World Cup match.

"We will bowl first," said Sarfaraz. "India v Pakistan is a big game but we just have to focus on playing our best game."

India captain Virat Kohli said he would have made the same decision, with the overcast conditions promising to assist Pakistan spearhead Mohammad Amir, who started the match with a maiden.

Both India and Pakistan are playing with two spinners each. India have Yuzvendra Chahal and Kuldeep Yadav while Pakistan have opted to field Shadab Khan along with left-arm spinner Imad Wasim.

Pakistan Cricket Team World Cup 2019 Leander Paes Cricket
Get the latest updates on Fifa Worldcup 2022 and check out  Fifa World Cup Schedule, Stats and Live Cricket Score. Like us on Facebook or follow us on Twitter for more sports updates. You can also download the NDTV Cricket app for Android or iOS.