Vijay Shankar has a plan for Afghanistan spinner Rashid Khan, thanks to the time they spent together in the Indian Premier League. 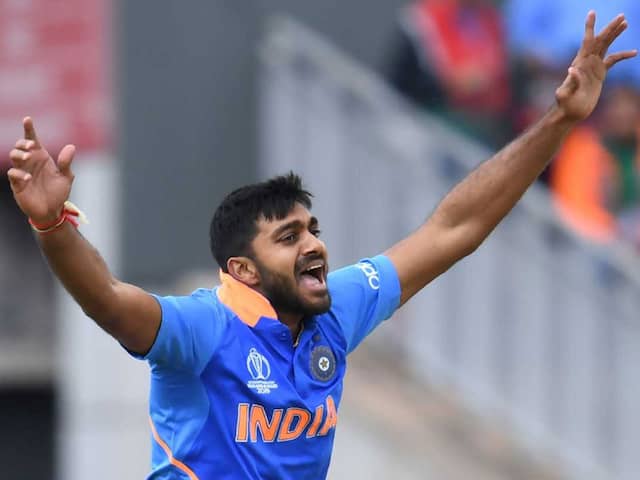 Vijay Shankar was hit on toe by Jasprit Bumrah during a net session.© AFP

Vijay Shankar, the fast bowling all-rounder who suffered an injury scare during the net session on Wednesday, is hopeful of making it to the playing XI when India play Afghanistan in their next World Cup 2019 match in Southampton on Saturday. Ahead of the match, Vijay Shankar has a plan for Afghanistan's 20-year-old spinner Rashid Khan, thanks to the time they spent together in the Indian Premier League (IPL). "Rashid is one of the best bowlers in limited overs. Having played with him in SunRisers Hyderabad, it's important for me to pick things from him. I try to pick his variations when I bat against him in the nets," Vijay Shankar said at the pre-match press conference on Friday.

Rashid Khan was hammered for 110 runs in nine overs in England's 150-run win against Afghanistan in Manchester on Tuesday.

Shankar was hit on toe by India speedster Jasprit Bumrah during a rain-hit training session on Wednesday.

Bumrah later assured that he didn't want to injure Shankar, who is now fit to play. "We don't obviously want to injure the batsman. Sometimes, when you play in the nets, nobody tells the batsmen not to hit. So they hit as well. It was unfortunate that he (Shankar) got hit. This is part and parcel of the game. But he is okay, he is fine," the fast bowler said on Thursday.

Shankar confirmed Bumrah's claim, saying: "I've got a lot better. Hopefully, I'll be able to play. When you play someone like Bumrah, you always expect that (yorker) but sometimes we miss it."

The 28-year-old all-rounder played for India in their last World Cup league stage match against Pakistan. He claimed two wickets and remained not out on 15.

Talking about his World Cup debut, Shankar, who was praised for his three-dimensional skills by the national selector, said: "Definitely it feels great to represent the country. Word Cup is really special as it happens once in four years."

"I am always working on my bowling and all departments of the game. I know I can bowl better than what I am now, I try to work on becoming a better bowler every time I practice," he added.

Apart from Shankar, young wicketkeeper-batsman Rishabh Pant will also be under spotlight when an injury-hit India take on Afghanistan.

Pant, who was designated as Team India reserve, made it to the squad following opener Shikhar Dhawan's injury and could add firepower to the side's batting line-up.

Vijay Shankar World Cup 2019 Cricket India vs Afghanistan, Match 28
Get the latest Cricket news, check out the India cricket schedule, Cricket live score . Like us on Facebook or follow us on Twitter for more sports updates. You can also download the NDTV Cricket app for Android or iOS.