Watch: Alex Carey Was Hit On The Chin By Jofra Archer During Semi-Final Clash

Alex Carey copped a quick bouncer by Jofra Archer on the face that left him bleeding from his chin. 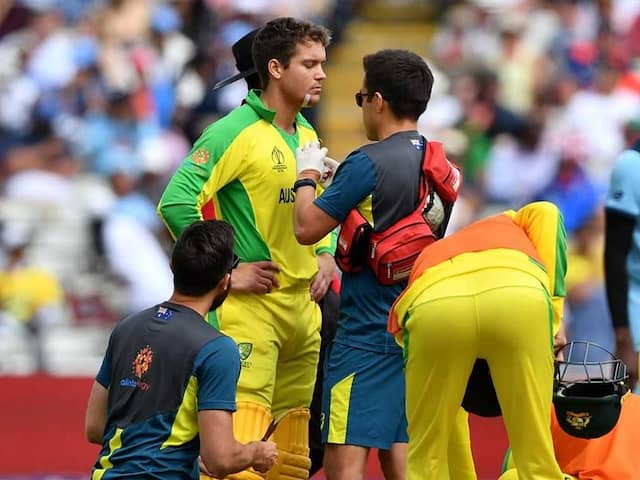 Alex Carey required treatment in the middle after being hit on the chin by Jofra Archer.© AFP

Australian wicketkeeper-batsman Alex Carey was hit on the chin by a short ball from England fast bowler Jofra Archer during the second World Cup 2019 semi-final at Edgbaston in Birmingham on Thursday. The batsman was trying to duck under the ball but the ball struck him on his chin and his helmet came off. Luckily for Carey, he managed to catch the helmet before it went on to the stumps. Soon after, the 27-year-old left-hander started bleeding from his chin and he required medical attention. However, Carey did not leave the field continued to bat for Australia.

How cool are you on a scale of 1 - Alex Carey? #ENGvAUSpic.twitter.com/xJm7S0c1Ya

In the match, after winning the toss and electing to bat, Australia were off to a horrendous start as they lost their captain on the first ball of the second over for a golden duck. Australia's leading run scorer in the ongoing tournament, David Warner soon followed suit as he edged one in the slips to Jonny Bairstow.

Peter Handscomb, who replaced injured Usman Khawaja in the playing XI also failed to bail out Australia with the bat as he was knocked over by Chris Woakes in the seventh over of the innings.

Australia only managed to score 27 runs in the first ten overs as the defending champions lost three wickets.

Alex Carey looked good in the middle after the blow on the chin, he missed out on a fifty by just four runs. After Carey was dismissed by Adil Rashid, he had stitches applied to his chin and he will be available to take the gloves.

UPDATE: Cricket Australia have confirmed Alex Carey has had stitches applied to his chin, but will be fine to take the gloves for England's batting innings #CWC19 pic.twitter.com/GCv2DyS6eh

Earlier, New Zealand defeated India in the first semi-final by 18 runs at Old Trafford in Manchester on Thursday to confirm their spot in the World Cup final for the second consecutive time.

The winner of this match between Australia and England will meet New Zealand at Lord's on July 14.

Jofra Archer World Cup 2019 Australia vs England, 2nd Semi Final Cricket
Get the latest Cricket news, check out the India cricket schedule, Cricket live score . Like us on Facebook or follow us on Twitter for more sports updates. You can also download the NDTV Cricket app for Android or iOS.