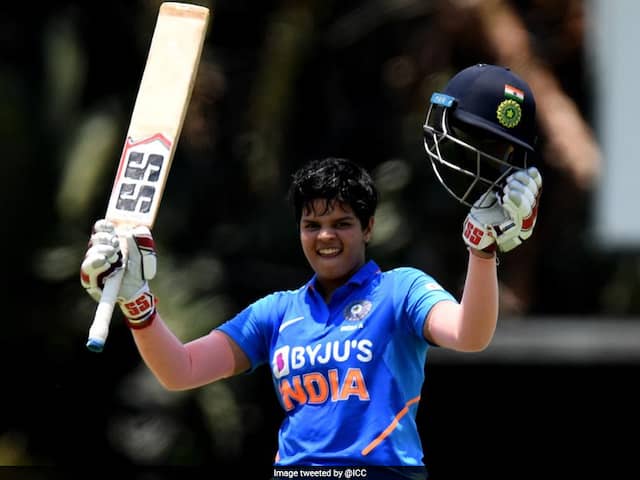 Shafali Verma, the 16-year-old teenager, has claimed the top spot in International Cricket Council (ICC) Twenty20 International (T20I) rankings on Wednesday. She has scored 161 runs in four matches in the ongoing Women's T20 World Cup. Shafali Verma, who went past New Zealand's Suzie Bates, is only the second Indian batter after former captain Mithali Raj to top the women's T20I rankings. In terms of bowlers, England's Sophie Ecclestone, who has taken eight wickets so far in the Women's T20 World Cup, grabbed the number one spot in the latest ICC rankings released on Wednesday.

India, riding on Shafali's explosive batting at the top of the order, have reached the knockout stages of the tournament and will face England in the semi-final clash on Thursday.

India along with South Africa were the only two teams in the tournament that remained unbeaten in the group stage fixtures.

Shafali, who came into the World Cup with 742 points, gained 19 points thanks to her batting blitz and is on top with 761 points.

India's opening batter Smriti Mandhana lost two points and she is at sixth place in the rankings with 701 points.

In the bowler's list, three Indian managed to stay in the top 10. Deepti Sharma is at fifth place while Radha Yadav and Poonam Yadav claimed seventh and eighth spot respectively.

New Zealand's Sophie Devine kept the number one spot in the all-rounder's list after a poor show from Australia's Ellyse Perry in the World Cup.

India Women Shafali Verma Mithali Raj Suzie Bates Women's T20 World Cup Cricket
Get the latest Cricket news, check out the India cricket schedule, Cricket live score . Like us on Facebook or follow us on Twitter for more sports updates. You can also download the NDTV Cricket app for Android or iOS.