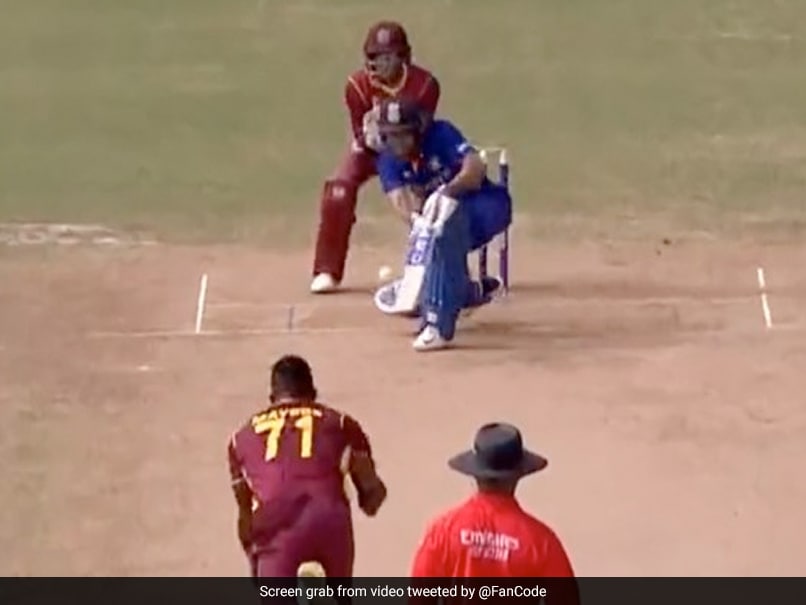 Shubman Gill goes for a scoop during the second ODI against West Indies.© Twitter

India scripted a memorable win in the second ODI against West Indies on Sunday, as they chased down a 312-run target in 49.4 overs. The win ensured that the Shikhar Dhawan-led side took an unassailable 2-0 win in the three-match series. Set a stiff target, the visitors were down to 205 for five in 38.4 overs but Axar Patel (64*, 35 balls) revived India's chase with his six-hitting prowess to take the visitors home with two balls to spare. Shreyas Iyer and Sanju Samson also scored half-centuries. Opener Shubman Gill also looked poised for a fifty-plus score but while on 43, he got out to Kyle Mayers in bizarre fashion.

In the 16th over by Mayers, Gill tried to scoop the ball behind the wicketkeeper just like Sri Lanka's Tillakaratne Dilshan once used to do. The youngster failed miserably as the ball took the bottom of the bat, went up and landed straight into the hands of Mayers.

.@ShubmanGill tried to hit behind the keeper and completely missed it.

In the match, after West Indies opted to bat, Shai Hope produced a masterclass 135-ball 117, while skipper Nicholas Pooran showed his big-hitting prowess with six maximums and one four during his 74 off 77 balls as West Indies posted an impressive 311 for six.

In reply, Gill (43) looked in good touch as he hit five boundaries during his 49-ball innings to give India a decent start but captain Dhawan (13) found the going tough at the other end. Dhawan was the first to depart with Mayers producing a stunning catch at third man off the bowling of Romario Shepherd.

Mayers then pegged India back with two quick wickets, first getting rid of a well-set Gill and then removing Suryakumar Yadav (9), who once again dragged one to his stumps. Iyer and Samson tried to take the chase deep with a 99-run partnership off 94 balls but once both departed, India still needed 105 runs from 11 overs.

It was the Axar Patel show after that as he kept fighting despite losing Hooda and Shardul Thakur.

West Indies Cricket Team West Indies vs India, 2022 Cricket
Get the latest updates on Fifa Worldcup 2022 and check out  Fifa World Cup Schedule, Stats and Live Cricket Score. Like us on Facebook or follow us on Twitter for more sports updates. You can also download the NDTV Cricket app for Android or iOS.