The West Indian all-rounder has been an integral part of the Indian Premier League for a long time. 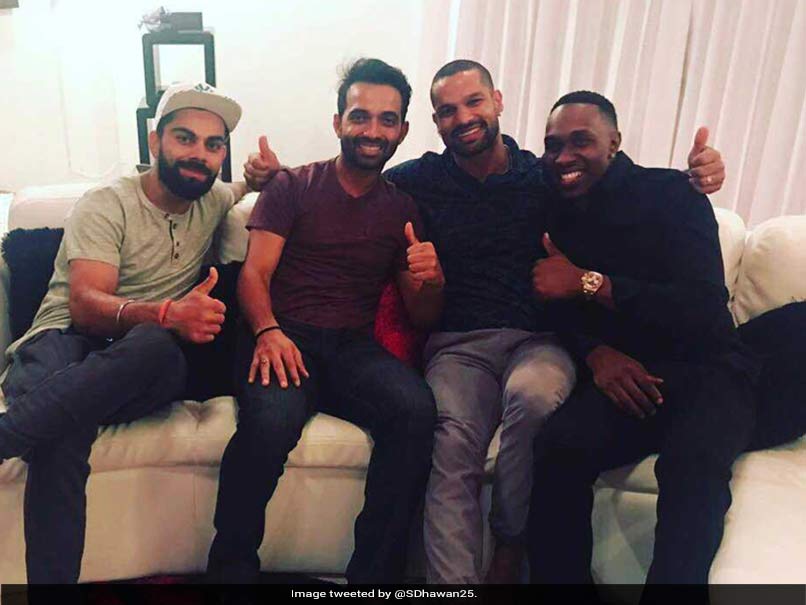 Dwayne Bravo seems to have a wonderful rapport with most Indian cricketers and that relationship once again came to the fore when India opener Shikhar Dhawan posted a picture of himself along with skipper Virat Kohli and Ajinkya Rahane relaxing at the West Indian all-rounder's house. BCCI had posted a picture on Twitter a few days ago of Dwayne and Darren Bravo visiting the Indian team's practice ahead of the first ODI against the West Indies in Trinidad. The Bravo brothers were seen speaking to Mahendra Singh Dhoni, Hardik Pandya and Rishabh Pant.

Kohli and Bravo seem to be very close. The Indian skipper had also featured in Bravo’s song ‘Chalo, Chalo’, which had many other cricketers like Chris Gayle, Kieron Pollard, Michael Hussey and Irfan Pathan.

Following India's arrival in the West Indies, Bravo had tweeted a welcome message for his 'machan' Dhoni and the rest of Team India members.

Nice to see my machan @msdhoni and #TeamIndia in . Wish both the teams best of luck #INDvWI https://t.co/kdzvsdDlAM

Bravo, who has played under Dhoni for several years in the Chennai Super Kings team, is not in the West Indian squad and last played an ODI for his country in October 2014.

India's tour of the West Indies didn't get off to the most auspicious of start with the first ODI being washed out after just 39 overs of India's innings.

India romped to a 105-run win over the hosts in the second ODI on Sunday to take a 1-0 lead in the five-match series. India will also play a Twenty20 international after the ODI series.

Sponsored by Vuukle
Comments
Topics mentioned in this article
India Cricket Team West Indies Cricket Team Virat Kohli Shikhar Dhawan Ajinkya Rahane Dwayne Bravo West Indies vs India 2017 Cricket
Get the latest updates on Fifa Worldcup 2022 and check out  Fifa World Cup Schedule, Stats and Live Cricket Score. Like us on Facebook or follow us on Twitter for more sports updates. You can also download the NDTV Cricket app for Android or iOS.