India vs West Indies: Men In Blue Get Surprise Visit From Dwayne Bravo

India face the West Indies in first of the five ODIs at the Queen's Park Oval, Port of Spain in Trinidad on Friday. 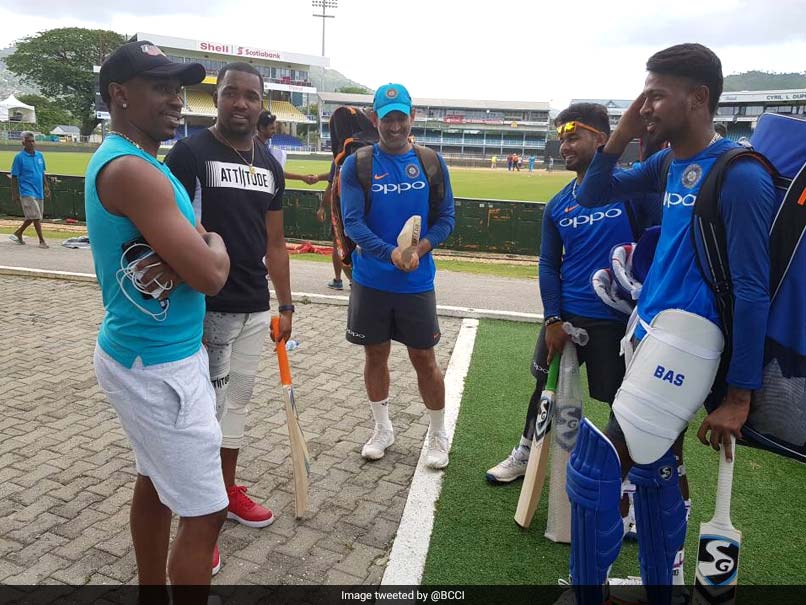 As members of the Indian cricket team sweated it out ahead of their opening One-day International match against the West Indies to be held on Friday, they got a surprise visit from half-brothers, Dwayne Bravo and Darren Bravo. Both Dwayne and Darren are not part of the West Indian squad for the first two ODIs of a five-match series against India. In an image tweeted by BCCI's official twitter handle, the Bravo brothers can be seen sharing a laugh with three members of the Indian team -- Mahendra Singh Dhoni, Rishabh Pant and Hardik Pandya.

Dwayne Bravo shares a good relationship with many Indian stars, including skipper Virat Kohli, courtesy his stint in the Indian Premier League (IPL). The West Indian all-rounder has played under Dhoni for several years in the Chennai Super Kings team.

Darren Bravo too has had a brief stint in the IPL with the Deccan Chargers and Kolkata Knight Riders, but has failed to really make any impact.

India face the West Indies in first of the five ODIs at the Queen's Park Oval, Port of Spain in Trinidad on Friday. The five-match ODI series will be followed by a Twenty20 international between the two sides.

A 5-0 whitewash is something that is expected against a side that has a cumulative ODI experience of 213 matches between 13 players with skipper Holder as the most-capped player with 58 matches to his name.

Compare it to a whopping 776 matches collectively between Yuvraj Singh (301), MS Dhoni (291) and Virat Kohli (184), the stark contrast between the two sides is so very distinct.

Comments
Topics mentioned in this article
India Cricket Team West Indies Cricket Team Hardik Pandya MS Dhoni Rishabh Pant Darren Bravo Dwayne Bravo West Indies vs India 2017 Cricket
Get the latest updates on India vs Australia and check out  Schedule, Results and Live Score. Like us on Facebook or follow us on Twitter for more sports updates. You can also download the NDTV Cricket app for Android or iOS.