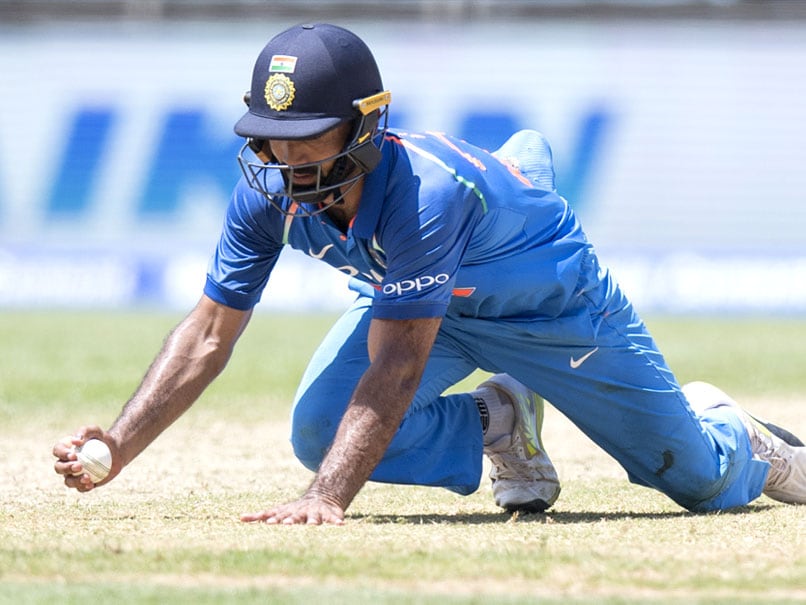 Dinesh Karthik was the highest scorer for the visitors with 48 runs off 29 balls.© AFP

Dinesh Karthik rued the two dropped catches of Evin Lewis that proved decisive in India's nine-wicket defeat against West Indies in the one-off Twenty20 match at Sabina Park in Kingston on Sunday. Lewis slammed 125 runs off just 62 balls to guide his team to a comfortable victory over the visitors. His innings was laced with six boundaries and 12 sixes. In the sixth over, Lewis went for a lofted straight drive off Bhuvneshwar Kumar but a mix-up between skipper Virat Kohli and Mohammad Shami saw the opportunity go begging. Four balls later, Lewis gave another chance when he heaved at a Kuldeep Yadav delivery but got a reprieve when an onrushing Karthik, at long-off, couldn't hold on to the catch.

"If mis-hits go for sixes then you know it is his day but he gave us two chances, we couldn't hold on to them. Those were costly opportunities and in T20 games every opportunity would cost you a lot. We could see the result went their way mostly because of dropped chances," Karthik said at the post-match press conference.

Explaining why he couldn't hold on to the catch, Karthik, who was the highest scorer for the visitors with 48 runs off 29 balls, said: "I am pretty confident of taking high catches in fielding. It is just that I came running in and the breeze took it away slightly more than I thought and from the corner of my eyes I saw Virat running in as well.

"I didn't want to bump into him and that took a fraction of a second for me, which made me run more than I should have. That kind of didn't get me in a good position and that is the reason I dropped the catch," he said.

Comments
Topics mentioned in this article
India Cricket Team West Indies Cricket Team Dinesh Karthik Virat Kohli Evin Lewis West Indies vs India 2017 Cricket Sabina Park, Kingston, Jamaica
Get the latest updates on ICC T20 Worldcup 2022 and CWG 2022 check out the Schedule, Live Score and Medals Tally. Like us on Facebook or follow us on Twitter for more sports updates. You can also download the NDTV Cricket app for Android or iOS.