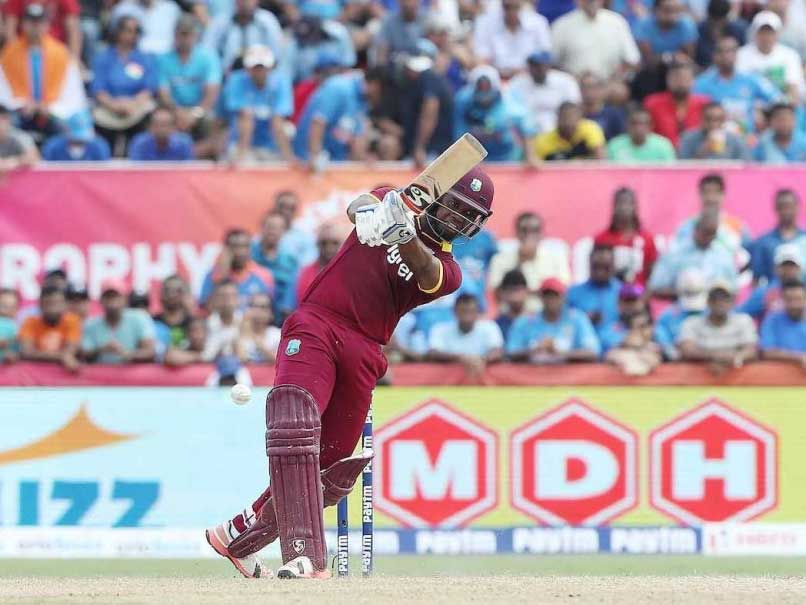 Powered by Evin Lewis' brilliant ton, West Indies eased to a 9-wicket win over India in 18.3 overs in the one-off T20 match at Sabina Park in Kingston, Jamaica on Sunday. After a steady start, Lewis upped the ante and smashed the bowlers all around the ground and helped West Indies win the match. After the dismissal of Chris Gayle, Samuels and Leiws built a 100-run partnership and tore the Indian bowling attack apart. For India, Kuldeep Yadav managed to scalp a single wicket in his four overs for 34 runs. (Scorecard)

Highlights of the T20 match between India and West Indies straight from Kingston.

00:24 IST: Four!Samuels swings hard and hits Jadeja for a boundary.

00:17 IST: SIX!!Lewis smokes Jadeja over straight down the ground.

00:14 IST: Four!Wide from Kuldeep, Lewis adds another boundary to his tally.

00:13 IST: Four!Samuels comes down the track and misses, Dhoni fails to collect, ball rolls away for a boundary.

00:12 IST: Four!Samuels comes down the track and carves Kuldeep over the in-field for a boundary.

00:09 IST: Six!Lewis slams Jadeja straight down the ground for another maximum.

00:07 IST: Six!Lewis hitting the bowlers all around the ground.

00:06 IST: Four!Samuels digs out the perfect yorker and gets a boundary.

00:04 IST: Four!Samuels this time goes straight down the ground.

00:03 IST: Four!Short and wide from Shami, Samuels guides the ball away for a boundary.

23:49 IST: Six!Short from Shami, Lewis pulls it away for a huge maximum.

23:38 IST: Four!Full from Ashwin, Lewis clobbers it for a boundary.

23:34 IST: Six!Lewis brings his 2nd T20I fifty with a maximum straight down the ground.

23:32 IST: Dropped!!Evin Lewis dropped on 47 as Kohli and Shami collide in an attempt to take the catch.

23:30 IST: Four!Lewis this time slaps the ball through the off-side.

23:29 IST: Six!Evin lewis smokes Bhuvneshwar Kumar for a huge maximum down the ground.

23:19 IST: Four!Gayle welcomes Shami with a boundary straight down the ground.

23:11 IST: Six!!Gayle dispatches Ashwin for a maximum over long-off.

23:08 IST: Good start for India, after the first over West Indies are five for no loss.

23:05 IST:Gayle gets off the mark in the very first ball.

23:04 IST:Bhuvneshwar Kumar is opening the bowling attack for India.

23:03 IST: Welcome back to second innings of the game.

22:43 IST: Four!Williams strays on the pads, Jadeja clips the ball for another boundary.

22:42 IST:Six!Jadeja clobbers Williams for a huge maximum on the leg-side.

22:34 IST:Ravichandran Ashwin comes out in the middle to join Jadeja.

22:33 IST: Out!!Jadhav departs in search of quick runs, Williams gets his second.

22:30 IST:Two new batsmen are out in the middle -- Kedar Jadhav and Ravindra Jadeja.

22:24 IST: Out!Looking to go for the big shot, Dhoni miscues, and Samuels takes a good catch.India 156 for four.

22:17 IST: Cleaned up!!Looking to go over short fine leg, Karthik misses and the ball crashes straight into the stumps, Samuels gets his first.

22:16 IST: Four!Pant follows the maximum with a boundary on the off-side.

21:57 IST: 50-run partnership comes up between Pant and Karthik.

21:54 IST: Four!Karthik cuts Narine with authority to score a boundary in the last ball of the over.

21:51 IST: Four!Samuel straying on the pads, Karthik gets the ball away for a boundary.

21:50 IST: SIX!Karthik, down on one knee, dispatches Samuels for a huge maximum.

21:41 IST: Four!Short from Badree, Pant hits the ball for a boundary off the backfoot.

21:33 IST: Two new batsmen out in the middle for India -- Dinesh Karthik and Rishabh Pant.

21:29 IST:After breathtaking start, India lose two quick wickets in form of both the openers.6th over done, India are 66 for two.

21:28 IST: OUT!Mix-up between Shikhar Dhawan and Rishabh Pant as Williams hits the stumps directly and Dhawan falls short of the crease.

21:25 IST: Four!Kohli follows the maximum with a boundary on the off-side.

21:21 IST:Fifty comes up for India in 4.4 overs, fastest against West Indies in T20 internationals.

21:19 IST: Four!Short and wide from Carlos Brathwaite and Dhawan welcomes him with a boundary.

21:15 IST: Four!Short from Williams, Kohli gets the ball away for a boundary.

21:12 IST: Four!! Wide from Badree, Dhawan gets a thick outside edge and the ball rolls away for a boundary.

21:09 IST: Four!Full from Taylor, Dhawan drives it beautifully for a boundary in the last ball of the over.

21:05 IST: Four!Kohli welcomes Jerome Taylor with a boundary on the leg-side.

21:04 IST: After first over India are 13 for no loss, brilliant start from the openers.

21:03 IST: Four!Short from Badree, Dhawan crunches the ball for the third boundary of the over.

21:02 IST: Four!Short delivery from Badree, Dhawan gets off the mark with a boundary.

21:00 IST: Four!!Badree straying on the pads, Kohli tucks it away for a boundary in the first ball of the innings.

20:58 IST:Virat Kohli and Shikhar Dhawan opening the batting for India.

20:57 IST:Players are making their way out in the middle.

20:42 IST: For India, Kuldeep Yadav is making his T20 debut and Rishabh Pant finds his place in the XI.

20:37 IST:Chris Gayle coming out of the dressing room for his first T20 on home soil.

Chris Gayle comes out from the dressing room for his first T20 on home soil at Sabina Park #Jamaica #WIvIND pic.twitter.com/3JkEH89gOS

20:06 IST:Fans arriving in the stadium before the start of play.

Welcome to #Jamaica
Fans arriving as we prepare for today's T20 at Sabina Park
Fantastic atmosphere in Kingston#WIvIND pic.twitter.com/8qpjquvr81

20:05 IST: Hello and welcome to the T20 match between India and West Indies from Kingston, Jamaica.

West Indies are reigning world champions with the likes of Gayle, Marlon Samuels, Sunil Narine and Samuel Badree still a part of the current squad led by their World T20 hero Carlos Brathwaite. Also there's Evin Lewis, who had scored a 49-ball-100 in West Indies' one-run win over India in a T20 game in Florida, last year. But T20 is one format where the home team starts on even keel against an Indian team which had its foot firmly on the pedal save an occasional blip in Jamaica.