Replying to the visitors' 310 for five in a match reduced to 43 overs per side, the hosts were restricted to 205 for six. 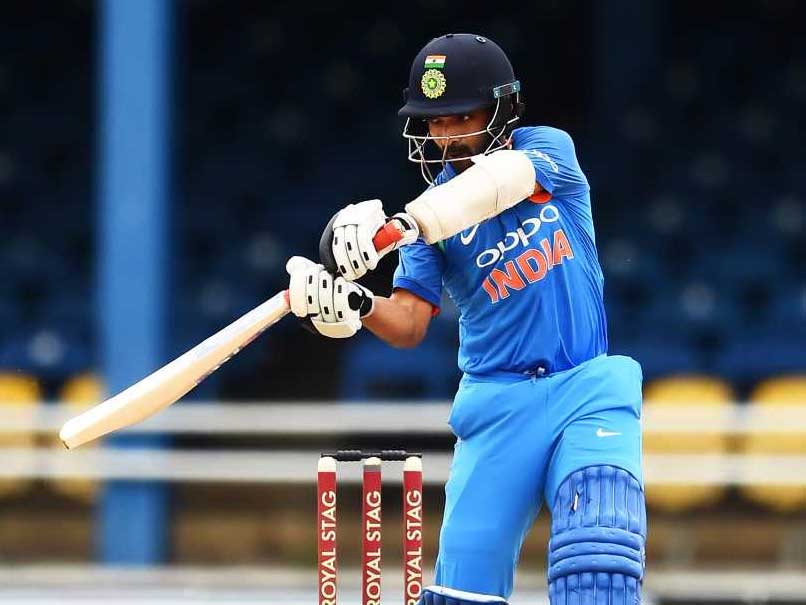 Ajinkya Rahane's third hundred and a blistering assault by captain Virat Kohlitook India to a comfortable 105-run victory over the West Indies in the second one-day international at the Queen's Park Oval on Sunday. Replying to the visitors' formidable total of 310 for five in a match reduced to 43 overs per side due to early morning rain and an two-hour delayed start, the hosts were restricted to 205 for six in reply despite a fluent 81 by Shai Hope at the top of the order.

Following the rain-ruined no result at the start of the series at the same venue two days earlier, India now take a 1-0 lead into the next two matches in Antigua next Friday and Sunday.

Rahane's well-paced 103 in another dominant opening partnership with Shikhar Dhawan (63) set the tone for the tourists after they were put in to bat in heavily overcast and damp conditions.

Kohli then picked up the pace even further when Dhawan departed after a first-wicket partnership of 114, the left-hander being deceived by Ashley Nurse to be stumped.

It was the off-spinner's only success of the innings although Nurse was by far the best of the West Indies bowlers, conceding just 38 runs off nine overs.

However the medium-pacer got his revenge in the same over when the batsmen attempted an ungainly heave and was bowled for 103.

Rahane's innings occupied 104 deliveries and was embellished by two sixes and ten fours.

Having dominated a 97-run second-wicket partnership with Rahane, Kohli made centre stage all his own in the final assault.

He seemed destined to reach another ODI hundred to the delight of a decent contingent of visiting Indian fans when he was caught at long-off by Nurse off Alzarri Joseph for 87 off 66 balls in the penultimate over, a thoroughly entertaining effort highlighted by four towering sixes and four fours.

West Indies' indiscipline in the field added to the challenge and their woes were encapsulated by a horrific final over delivered by their captain Jason Holder.

He conceded 20 runs, bowled three no balls and had to be pulled out of the attack with one ball left because two of those no balls were delivered over waist-high to the batsman on strike.

It was left to Jonathan Carter to complete the over and the innings, encapsulating a shoddy effort overall by the home side.

Promoted to open the batting, Hope was the lone bright light in the West Indies response, his attacking innings off 88 balls with three sixes and five hours keeping slim hopes alive until he fell leg-before to Kuldeep Yadav.

Having his first bowl in ODIs, the left-arm wrist-spinner conceded 32 runs off his first four overs but then tasted success by having Evin Lewis stumped before adding the scalps of Hope and Holder to complete a miserable day for the Caribbean side's leader.

Comments
Topics mentioned in this article
India Cricket Team West Indies Cricket Team Ajinkya Rahane Shikhar Dhawan Virat Kohli Kuldeep Yadav Bhuvneshwar Kumar Shai Hope West Indies vs India 2017 Cricket
Get the latest updates on IPL Auction 2023 and check out  IPL 2023 and Live Cricket Score. Like us on Facebook or follow us on Twitter for more sports updates. You can also download the NDTV Cricket app for Android or iOS.