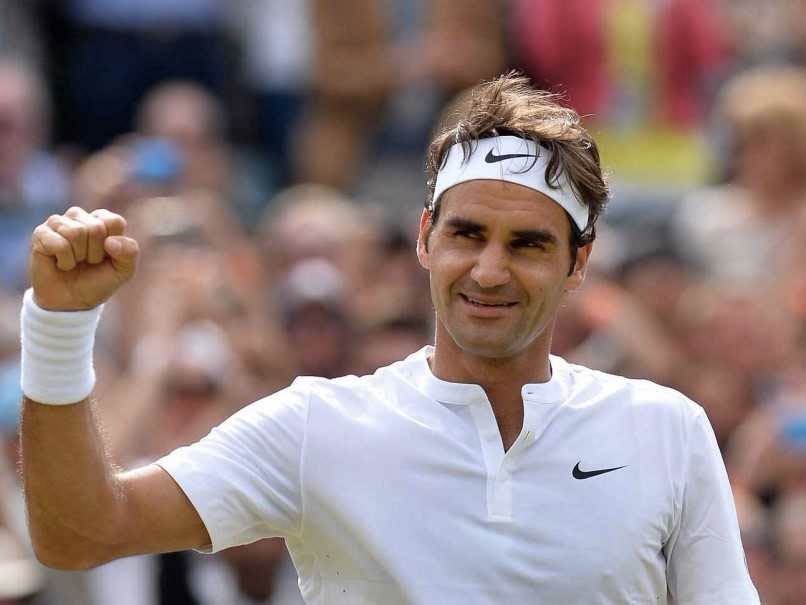 Roger Federer reached a record 11th Wimbledon final on Friday with a 7-6(7-4) 7-6(7-4) 6-4 win over 11th seed Tomas Berdych of the Czech Republic. Federer is yet to drop a set this Wimbledon and extended the all-time record of Wimbledon finals he took sole ownership of at the 2012 edition. He will play Marin Cilic, who is in his maiden Wimbledon final, on Sunday. Cilic quelled American Sam Querrey's challenge in four sets - 6-7 (6) 6-4 7-6 (3) 7-5 - and close to three hours to book a final berth after the first semi-final of the day.

Federer is aiming to add a 19th Major to his resume after winning the elusive 18th in Melbourne this January. The Swiss third seed is attempting to win his eighth Wimbledon title this time. He holds a 6-1 head-to-head lead over Cilic. Cilic had beaten him at the 2014 US Open semi-finals, the only Major he went on to win. The 35-year-old Federer had thrashed 2016 finalist Milos Raonic in the quarter-finals.

23:25 IST: Thank you for joining us this evening. We will be back for the women's singles final on Saturday when Venus Williams takes on Garbine Muguruza. Until then, good night!

23:23 IST: Federer will play Cilic on Sunday in the men's singles final.

23:09 IST: A break point opportunity for Federer, wins the point with a deep-placed forehand volley. Berdych hits the backhand return long and Federer gets the break! The Swiss leads 4-3!

23:05 IST: A deep serve to get the advantage and closes out the game with his third ace in the game! That's the Federer style isn't it! He holds to equal scores 3-3.

23:04 IST: Berdych has two break points! Federer serves an ace to save the first one. And another to make it deuce!

23:01 IST: Berdych comes up with a backhand stunner to get the advantage and then Federer hits the return into the net. So Berdych holds and goes up 3-2.

22:45 IST: Can Berdych make a comeback from two sets down? It remains to be seen as the third set gets underway

22:27 IST: That was an easy game. Federer holds serve to lead 5-4. Can he break Berdych in the next game to take a two sets lead?

22:20 IST: The crowd is on its feet as Federer's unbelievable angled return makes it deuce. Goes up 4-3 after winning the next two points.

22:19 IST: Berdych has a break point! He set it up with a brilliant forehand return of serve winner.

22:15 IST: Both have served 5 aces so far in the match. Who do you think will end with the highest number today?

22:10 IST: Berdych manages to hold his serve and survive the Federer pressure. It's 2-2

22:09 IST: What a forehand pass from Federer. Absolutely kisses the line as Berdych looks stunned. Back to deuce.

22:08 IST: Berdych saves a break point opportunity with a brilliant serve. Back to deuce and then hits a winner to set up a game point.

21:54 IST: 6-4 Federer as Berdych makes another unforced error. 2 set points for the Swiss. Can he convert? YES he can!! Federer wins the first set 7-6 (4) after 53 minutes of play as Berdych mishits a backhand.

21:50 IST: Federer leads 4-2 as the players change sides. Mirka Federer is seen cheering on her husband from the stands.

21:48 IST: Sublime Federer does what he does best. Approaches the net and puts away the ball for a winner, takes a 3-1 lead in the tiebreak.

21:47 IST: Berdych seems to be attacking that Federer forehand! That's an unlikely strategy! Will it pay off?

21:46 IST: The applause is deafening as Federer holds serve, takes the first set to a tiebreak

21:42 IST: Berdych comes up to the net and hits a drop shot, Federer picks it up and hits it straight at his opponent to gain a break point. But loses the opportunity once more.

21:40 IST: Break point for Federer after Berdych hits long. Can he convert? No, back to deuce.

21:35 IST: The unforced errors are piling up uncharacteristically from the Swiss Master. Berdych races to a 40-0 lead on his serve.

21:32 IST: Federer saves again, back to deuce. But an unforced error from the Swiss gives Berdych another chance for a break. And he doesn't miss this opportunity. Federer loses his serve, serving with new balls as the scores are levelled 4-4.

21:31 IST: Nope, it's back to deuce but Berdych sets up a second break point in the game with a forehand cross court winner.

21:30 IST: That's a double fault from Federer to hand Berdych a break point. Can the Czech convert?

21:26 IST: Unforced error from Federer to give Berdych the game. Federer leads 4-3. Can he win the set after this changeover?

21:25 IST: That single-handed backhand is such a delight. Federer makes it deuce with a backhand down the line winner in the seventh game.

21:24 IST: It seems the pressure is hurting Berdych, making too many unforced errors. He needs to concentrate and try his best. Remember, he's beaten the Swiss previously in 2010 at the same venue.

21:22 IST: Federer has been on court for 22 minutes and he's already broken Berdych and taken a 4-2 lead! He won the last game at love on his service.

21:13 IST: The jam-packed Centre Court crowd cheers for any point Federer wins. Can he break Berdych?

21:00 IST: And here we go. It's Federer vs Berdych. Federer aiming to reach his 11th Wimbledon final while Berdych his second.

20:25 IST: Cilic is concentration personified right now. His big serves are on point as he races to 40-15. But makes a backhand unforced error for Querrey to win a point. It's 40-30

19:45 IST: Easy service game for Querrey. Leads 6-5. Can he break Cilic in the next game to take the third set?

19:33 IST: The pace seems to have picked up from both guys, The big serves are booming as none want to relinquish their serve

19:24 IST: Querrey stuns with an angled crosscourt backhand winner to clinch the break. It's now 2-2.

19:17 IST: 2 break point opportunities for Cilic. Querrey saves one but Cilic still has a chance.

19:12 IST: Silly mistake from Querrey. It's the third deuce now

19:11 IST: Cilic crushes the forehand down the line winner on the run! Querrey has no answer! Back to deuce

19:09 IST: Querrey fights back. Displaces Cilic and then finishes the point with a forehand volley. It's deuce.

18:59 IST: Cilic is not letting this opportunity pass him by. Races to take a 5-3 lead on his service game

18:58 IST: There's Sachin Tendulkar in attendance at the Centre Court. Wonder who the cricket legend is supporting in this match!

18:55 IST: He's done it! He passes Querrey beautifully with a backhand winner. Breaks Querrey to go up 4-3!

18:49 IST: Beautiful winner from Querrey. His backhand return almost kisses the tram line, Cilic no where close to it. Querrey keeps the lead 3-2. The second set is still on serve.

18:47 IST: That's a break point chance!! Cilic forces Querrey to err as he kept to his backhand.

18:35 IST: Cilic misses out on a break point opportunity! Querrey takes the lead in the second set as he leads 1-0. Can he break Cilic now?

18:26 IST: There seems to be a hold up. Something's happening in the crowd? Someone is taken ill in the crowd it seems.

18:25 IST: Cilic serves an ace but Querrey asks for a review. The American wins the challenge. Cilic to serve a second serve.

18:11 IST: Game Cilic as the American's return of serve hits the net. The Croatian leads 6-5. Can he now break Querrey to win the first set?

18:00 IST: Cilic is consistently attacking Querrey's backhand and forces the American to make an error. Cilic takes a 4-3 lead.

17:56 IST: Both these fellows are known for their big serves. And they are yet to make mistakes. Querrey levels scores with a forehand down the line winner from mid court at 40-15. It's 3-3 now

17:46 IST: That was a strong serve on game point as Cilic makes an error on the return of serve. Querrey levels scores 1-1

17:44 IST: Let's see how Querrey's serve is today. Can he keep the match on serve or will Cilic break?

17:36 IST: Cilic and Querrey warm up on court. Cilic leads 4-0 in head-to-head meetings. Can Querrey break the jinx?

17:31 IST: And here we go. Cilic and Querrey are walking onto Centre Court.

17:23 IST: The first semi-final will get underway in some minutes, stay tuned

17:13 IST: And then it's Roger Federer Vs Tomas Berdych in the second Wimbledon men's singles semi-final

17:10 IST: Hello and welcome to the live blog of the men's singles semi-finals at Wimbledon.

Federer is aiming to add a 19th Major to his resume after winning the elusive 18th in Melbourne this January. The Swiss third seed is attempting to win his seventh Wimbledon title this time. Berdych had previously halted Federer in the 2010 quarter-final and the Czech is hoping to repeat that feat seven years later. While the 35-year-old Federer is yet to drop a set and easily thrashed 2016 finalist Milos Raonic in the quarter-finals, Berdych had it easier after second seed Novak Djokovic retired hurt trailing a set in his last-eight clash. If Berdych beats Federer, he will reach his second Wimbledon final.

Listen to the latest songs, only on JioSaavn.com
Comments
Topics mentioned in this article
Marin Cilic Sam Querrey Roger Federer Tomas Berdych Tennis Live Blogs
Get the latest updates on IPL 2021, IPL Points Table , IPL Schedule 2021 , live score . Like us on Facebook or follow us on Twitter for more sports updates. You can also download the NDTV Cricket app for Android or iOS.