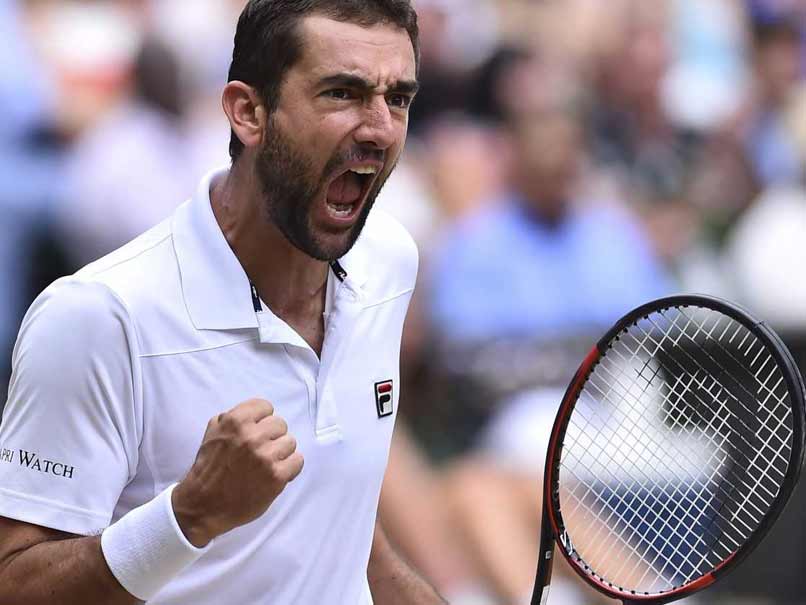 Croatia's Marin Cilic reached his first Wimbledon final at the 11th attempt on Friday with a 6-7 (6/8), 6-4, 7-6 (7/3), 7-5 win over America's Sam Querrey. The seventh-seeded Croatian, who was US Open champion in 2014, will face either seven-time Wimbledon winner Roger Federer or Tomas Berdych in Sunday's final. "It's unbelievable. I have played really well from the start of the tournament," said 28-year-old Cilic. "Sam played at a high level especially in the first set. I was 4/1 up in the tie-break and didn't convert.

"But after that I was better in the return games. I thought the level was really high.

"I'm feeling a positive on the court. It's extremely important. My emotions are helping me a little bit."

Cilic fired 25 aces and 70 winners past world number 28 Querrey, the man who ended Andy Murray's reign as Wimbledon champion in the quarter-finals.

Cilic trails Federer 6-1 in head-to-head meetings and is level at 6-6 against Berdych.

Whoever he faces on Sunday, he said he is ready for the challenge.

"It's definitely going to be a huge semi-final between Roger and Tomas. It's an open match," he said.

"Roger is playing the best tennis of his career on this court. Whoever it is I will be ready."

Cilic is the second Croatian man to make the final after 2001 champion -- and former coach -- Goran Ivanisevic.

"I never doubted it. Who knows what will happen in the final? It's great to see Cilic there," Ivanisevic told the BBC.

Cilic took a 4-0 career lead over Querrey into Friday's semi-final, including a marathon 5hr 31 min win at Wimbledon in 2012, the second longest match in tournament history.

There were signs that spectators were in for another long afternoon with no break points at all in the first set as the serve of the two 6ft 6in (1.97m) giants dominated.

However, a Cilic backhand error off a second serve handed Querrey the opener, although the Croatian's concentration wasn't helped by a break in play when a woman collapsed in the crowd at 6/6 in the tiebreak.

- Overwhelming favourite -
Cilic was unable to convert break points in the first and fifth games of the second set but the pressure eventually told and he broke through for the set-deciding game at 4-3.

The third set was equally tight, a break apiece in the third and fourth games with another tiebreak required.

Querrey was a break to the good again in the fourth set, but Cilic clawed his way back to 4-4 before claiming victory with another power-packed forehand winner.

Later Friday, 35-year-old Federer will be playing in a 12th semi-final at the All England Club where he will face Berdych, the 2010 runner-up.

Federer has defeated his Czech opponent 18 times in 24 meetings.

The Swiss star is bidding to reach an 11th final at Wimbledon, having made the semi-finals without dropping a set and being broken just three times.

Victory will make Federer the second oldest finalist after Ken Rosewall who finished runner-up in 1974 at the age of 39.

Playing in his 42nd Grand Slam semi-final, he is the overwhelming favourite after 'Big Four' rivals Murray and Novak Djokovic suffered injury-hit exits on Wednesday and Rafael Nadal lost in the last 16.

Berdych, however, will not be overawed by facing Federer having defeated him in four sets in the 2010 quarter-finals on his way to his only appearance in a Slam final.

The 31-year-old knocked out eighth-seeded Dominic Thiem in five sets in the last 16 before seeing Djokovic retire with a right elbow injury in their quarter-final.

Comments
Topics mentioned in this article
Marin Cilic Sam Querrey Tennis
Get the latest updates on ICC Women's Cricket World Cup 2022 and IPL 2022, check out the Schedule , Live Score and IPL Points Table. Like us on Facebook or follow us on Twitter for more sports updates. You can also download the NDTV Cricket app for Android or iOS.