Novak Djokovic In Action On Day One At US Open Bubble

World No.1 Novak Djokovic headlines the opening day of the US Open that promises to be unlike any other and which is missing several top players due to coronavirus fears. 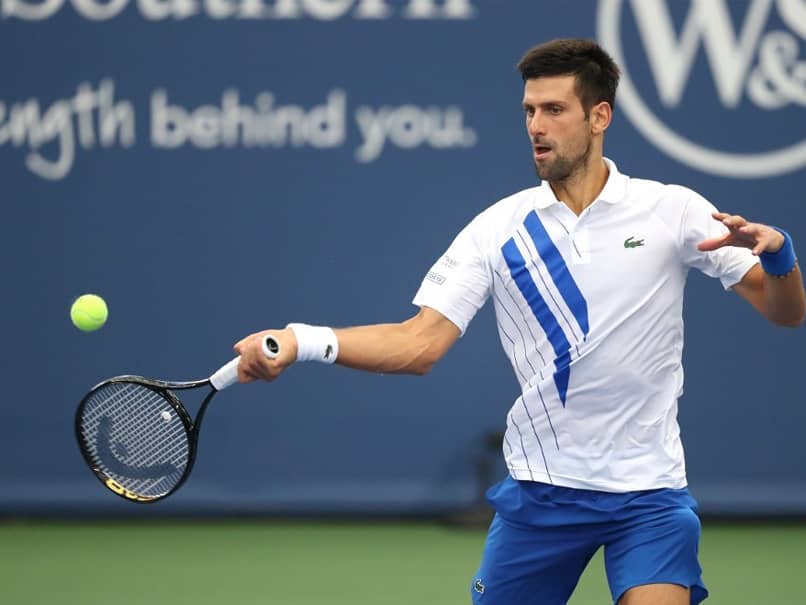 US Open: Novak Djokovic begins his quest for an 18th Grand Slam title on Monday.© AFP

Overwhelming favorite Novak Djokovic begins his quest for an 18th Grand Slam title on Monday as a unique, spectator-free 2020 US Open gets underway in a COVID-19 quarantine bubble at Flushing Meadows. The world number one headlines the opening day of a tennis major that promises to be unlike any other and which is missing several top players due to coronavirus fears. Novak Djokovic takes on unheralded Damir Dzumhur of Bosnia-Herzegovina in a round-one evening match at an Arthur Ashe Stadium that in normal years buzzes with 23,000 screaming fans.

But due to strict measures aimed at keeping COVID-19 out of the US National Tennis Center, only players, officials and a handful of media will be watching in-person this year.

"It is strange to see," said Djokovic, crediting his love of playing on the New York hardcourts to Ashe, which he described as "the most dynamic and explosive court" in the game.

"The circumstances are very unusual but we have to deal with it and try to embrace it," the Serbian superstar added.

The US Open marks the first Grand Slam of the coronavirus era, and the first since the Australian Open in January and February, after the global pandemic wiped out much of the season, including Wimbledon.

Players are being kept in a tightly controlled environment to minimize the risk of infection and are being tested for coronavirus regularly throughout the tournament.

The men's draw was disrupted on the eve of the tournament Sunday when France's Benoit Paire was removed after organizers announced that an unidentified player had been withdrawn after testing positive for COVID-19.

Under New York state rules, any player that tests positive is immediately withdrawn and must self-isolate for at least 10 days.

Most competitors are staying at specific hotels and are not allowed to travel anywhere other than to and from the tournament site and their accommodation.

Some players, including Djokovic, have rented private houses that must be guarded 24 hours by security to safeguard the quarantine bubble.

Parts of the tennis center grounds were turned into makeshift hospital rooms during the worst of the pandemic in New York in April.

Intense cleaning and safety protocols were put in place before the US Open allowed players into the bubble.

And the number of support personnel for each competitor is limited, as is the number of players allowed into the locker room at any one time.

Players are advised to wear masks when they are not on court and must wash their hands regularly.

The absence of defending champion Rafael Nadal and Swiss legend Roger Federer gives Djokovic a prime opportunity to gain ground on his rivals in the chase for the all-time men's Grand Slam singles title record.

Top seed and three-time US Open winner Djokovic -- who has won five of the past seven Grand Slam crowns -- has 17 slams, behind Nadal on 19 and Federer on 20.

Also on Ashe Monday is top-seeded woman Karolina Pliskova, who goes up against 145th ranked Anhelina Kalinina of Ukraine.

Two-time Grand Slam winner Naomi Osaka is scheduled to play as well, but her status is in doubt due to a left hamstring injury that forced her to pull out of Saturday's WTA New York final.

Women's number one Ashleigh Barty and reigning champion Bianca Andreescu are among high-profile women skipping the event because of concerns about coronavirus.

Novak Djokovic Roger Federer Rafael Nadal Serena Williams Naomi Osaka Tennis
Get the latest updates on IPL 2021, IPL Points Table , IPL Schedule 2021 , live score . Like us on Facebook or follow us on Twitter for more sports updates. You can also download the NDTV Cricket app for Android or iOS.