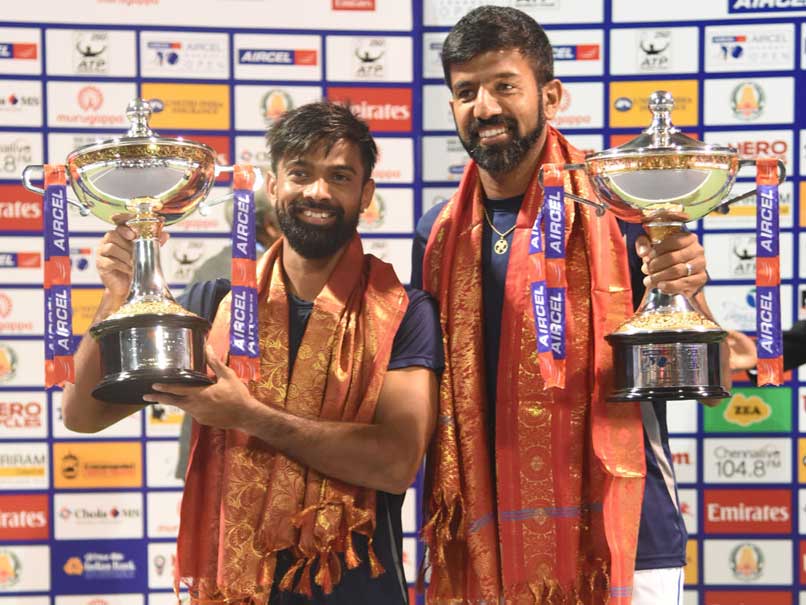 Rohan Boppand and Jeevan Nedunchezhiyan cruised to a 6-3, 6-4 win.© NDTV

Rohan Bopanna and Jeevan Nedunchezhiyan, playing only the second time together, notched up a memorable victory in a historic all-Indian doubles final, as they outplayed compatriots Divij Sharan and Purav Raja in the Chennai Open on Sunday.

World number 28 Bopanna and Jeevan beat the most-consistent and impressive team 6-3 6-4 in just 65 minutes to win their first title together and deny Raja-Sharan their third at this level.

It is the first time that an Indian team has clinched the Chennai Open trophy since the legendary Leander Paes and Mahesh Bhupathi took the title in 2011.

The Lee-Hesh pair, also known as the Indian Express, won five titles at the Nugumbakkam Stadium during their glorious careers.

It was Bopanna's 15th career title and first since June 2015 when he won the Stuttgart trophy with Florin Mergea. He lost two final last season in Sydney and Madrid.

Sharan and Raja, who have two titles (Bogota, 2013) and (Los Cabos, 2016), have lost a final for the first time in the third appearance together.

It was a big win for Jeevan, who played his ATP level final, as he made a shift from singles to focus on doubles career very recently. The Chennai lad has three doubles titles on the Challenger circuit.

The final was littered with breaks, and surprisingly, Sharan and Raja could not play the way they had en route the final, including knocking out Leander Paes and Andre Sa.

Of the four players on the court, Jeevan was the least experienced at this level but he stood out with his service games as he was the only player to not concede a break in the match.

Not only he served well, he played smartly, often creating chances with his angled winners. His accurate serving set up Bopanna at the net for easy winners.

Raja and Sharan struggled with their serves in the wake of some superb returns from their rivals and it made a huge difference to the outcome of the match.

Bopanna said the all-Indian final was great for the game in the country.

"It's a big step forward for Indian tennis. Who knows if it inspires a kid to pick up racquet. It's a huge win for Indian tennis," Bopanna, who has teamed up with Pablo Cuevas for the 2017 season, said.

The Coorgi said Jeevan was outstanding on the court.

"My job was to keep him relaxed. Even Purav and Divij played felt the pressure. We played better as a team. There were chances for both the teams and we took more," Bopanna added.

Jeevan said it was tough to beat Sharan and Raja.

"They are not someone who give easy points. We were able to communicate better during change overs to counter their I formation. Rohan kept going for his big returns. It's a great start for me to the season," the diminutive left-hander, who has teamed up with Indonesia's Christopher Rungkat for three weeks post Australian Open, said.

In an ominous start, left-handed Sharan, easily the best server in the tournament till final, was broken in the second game. Raja almost lost his but saved a break chance in the fourth.

Scores became even when Bopanna also conceded break in the fifth game. On the second break chance, Jeevan and Raja were involved in a gripping rally from close to the net and it ended when the Delhi lad found a volley winner.

Serving at 3-4, Raja was broken on deciding point and it gave Bopanna a chance to serve out the first set easily.

Sharan saved three breakpoints in the opening game of the second set and broke Bopanna in the second to lead 2-0, but they could not carry forward the lead as Raja lost serve in the third.

Jeevan came out with exceptional service game in the fourth to make it 2-2 with Bopanna making it look very easy with his drop volleys.

A break was the last thing the Raja-Sharan duo needed at that stage but the left-hander lost it on the deciding point after saving three break chances.

The break-advantage remained with the winners as no pair conceded a break after that and Bopanna served out the match at love with Raja hitting a forehand error on first match point.

Comments
Topics mentioned in this article
Tennis Rohan Bopanna Jeevan Nedunchezhiyan Divij Sharan Purav Raja
Get the latest updates on IPL 2021, IPL Points Table , IPL Schedule 2021 , live score . Like us on Facebook or follow us on Twitter for more sports updates. You can also download the NDTV Cricket app for Android or iOS.