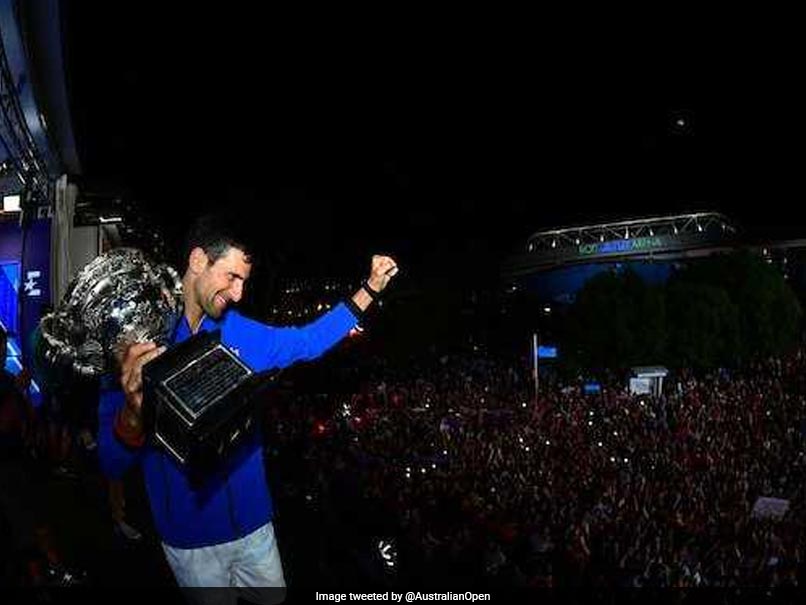 Novak Djokovic blitzed Rafael Nadal in straight sets in the final to win a record seventh Australian Open men's singles title. The Serb's 6-3, 6-2, 6-3 rout of Rafael Nadal, ranked second in the world, saw him stretch his lead at the top of the world rankings, just a few months after he plummeted outside the top 20 for the first time in 12 years. Post his record-breaking win in Melbourne, a video showed Djokovic meeting some fans and signing autographs. One fan, however, didn't have anything for the World No.1 to sign on. Djokovic made a heart-warming gesture of signing the jacket he was wearing and giving it to the fan.

The video of the incident was posted on the official Twitter handle of the Australian Open. It quickly went viral with fans hailing the Serb for being a "true champion".

A fan didn't have anything for him to sign, so @DjokerNole took off his jacket, signed it and gave it away ??#AusOpen pic.twitter.com/DjbaJAHsUr

Incredible! A true champion and a true champion of your fans. We truly adore you @DjokerNole..not just for your game but who you are as a person. #teamdjokovic #nolefam #AusOpen

Unbelievably graceful, I'm sure that fan will cherish it and remember that act of kindness#Djokovic #AusOpenFinal

Yes, he is that kind-hearted. Not once, twice or thrice. A true champion!

You played well today. So glad to see you back in shape and form although it's one of your best platforms. Please keep it up!

That's why @DjokerNole is the people's champ

The win in Melbourne put Djokovic, 31, out on his own ahead of Roger Federer and Roy Emerson, who both won six Australian Open men's singles titles.

The current World No.1 is also just two behind Nadal's total of 17 Grand Slams and five shy of Federer's record of 20.

Victory extended his win-loss record against Nadal to 28-25 and squared the Grand Slam final count between the pair at 4-4.

Djokovic now heads to the next major, at Roland Garros, aiming to hold all four Grand Slam titles concurrently for a second time in his career -- he first achieved it when winning the French Open in 2016 -- despite only managing to be competitive for the second half of 2018.

Novak Djokovic Rafael Nadal Roger Federer Tennis
Get the latest updates on Fifa Worldcup 2022 and check out  Fifa World Cup Schedule, Stats and Live Cricket Score. Like us on Facebook or follow us on Twitter for more sports updates. You can also download the NDTV Cricket app for Android or iOS.