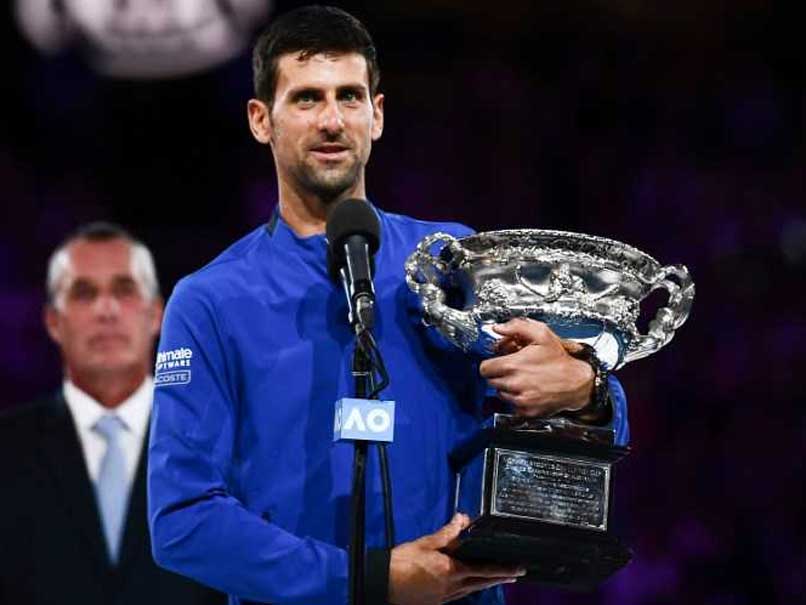 An imperious Novak Djokovic won a record magnificent seventh Australian Open title by routing Rafael Nadal 6-3, 6-2, 6-3 Sunday with a display of flawless tennis. The Serbian world number one dominated the Spanish second seed to win his 15th Grand Slam title in just 2hr 4min on Rod Laver Arena. It put Djokovic, 31, out on his own ahead of Roger Federer and Roy Emerson, who both won six Australian Open men's singles titles. Djokovic dropped to his knees and kissed the ground after vanquishing his greatest rival.

"I'm just trying to contemplate on the journey in the last 12 months," said an emotional Djokovic, pausing for breath to compose himself and not become tearful.

"I had the surgery exactly 12 months ago," he added, referring to an elbow operation that saw him slump out of the world's top 20 before bouncing back to win Wimbledon and the US Open.

"To be standing now here in front of you today and managing to win this title and three out of four Slams, this is amazing. I am speechless."

The pair's only previous final in Australia, in 2012, developed into a record-breaking 5hr 53min slugfest -- the longest in Grand Slam history.

A repeat of that epic never materialised with Nadal uncharacteristically nervous at the start and Djokovic taking an immediate advantage that he would never relinquish.

"Even if tonight was not my best day of course I had someone that played a lot better than me tonight," said Nadal.

"I have been going through tough moments in the last year. I was not able to play until the first round here. Even if tonight was not my night it's so important for me to be where I am coming back from injury."

Djokovic noted that the duo had both endured injury-ravaged 2018 campaigns.

"Obviously a tough match tonight, but ... you came back from an injury that took you out from the tour since September last year," Djokovic said of Nadal.

"You're showing to me and to all your other colleagues and many young tennis players around the world what is definition of the fighting spirit and resilience."

The Spaniard had not had his service broken since the third set of his first round match but that streak ended in a flash as the Serb came sprinting out of the blocks.

Djokovic was in total control on his own delivery and won his first four service games without conceding a single point, even inducing Nadal to miss a forehand completely on the way to grabbing the set in 36 minutes.

The second set followed a similar pattern, with Djokovic racing through games on his own serve, while Nadal struggled to hold.

The pressure told in the fifth game and Djokovic broke again when Nadal hit a lob volley long after an exchange at the net.

The on-song Serb was so fired up he broke Nadal again to go to 5-2 before serving out for a two-set lead with three aces in a row with just 1hr 16min on the clock.

The statistics were as telling as the scoreline: Djokovic had served eight aces to Nadal's one and made just four unforced errors while the Spaniard had coughed up 20.

When Djokovic broke again in the third game of the third set it was just a matter of how quickly he would finish off Nadal.

The end was swift, as Djokovic withstood one break point at 3-2 before administering the last rites in a flurry of winners off both wings.

Victory extended his win-loss record against Nadal to 28-25 and squared the Grand Slam final count between the pair at 4-4.

Djokovic has now completed a hat-trick of Slams following his wins at Wimbledon and the US Open.

He will go to Paris in May for the French Open seeking to become the only man in the Open Era to win all four majors twice.

Novak Djokovic Rafael Nadal Tennis
Get the latest updates on IPL Auction 2023 and check out  IPL 2023 and Live Cricket Score. Like us on Facebook or follow us on Twitter for more sports updates. You can also download the NDTV Cricket app for Android or iOS.