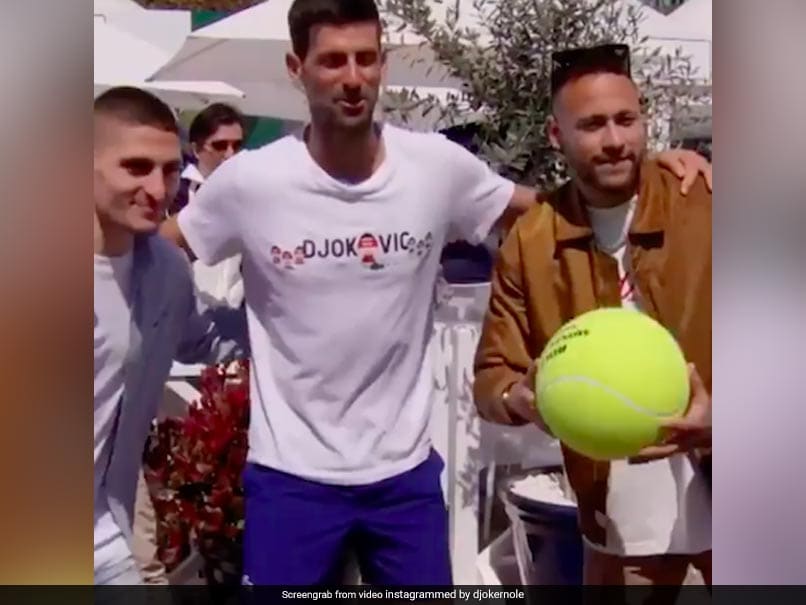 Novak Djokovic enjoyed a game of keep-upy with Neymar and Marco Verratti.© Instagram

Tennis star Novak Djokovic looked in a good mood as he enjoyed a game of keep-uppies while hanging out with Paris Saint-Germain stars Neymar Jr and Marco Verratti in Monte Carlo on Tuesday. Before his opening game at the Monte Carlo Masters tournament, Djokovic met Neymar and Verratti and indulged with them in a light game which he eventually seemed to have lost. The crowd in Monte Carlo looked visibly awed and were hooked by the presence of the tennis great and both football stars.

However, the smiles faded off from Djokovic's face pretty soon as he went on to lose 6-3, 6-7 (5/7), 6-1 to 46th-ranked Spaniard Alejandro Davidovich Fokina and was knocked out of the tournament.

Djokovic looked out of sorts as his service game fell apart in the course of the match. He dropped his serve eight times.

This was only Novak's second tournament of the year following the pre-Australian Open saga earlier this year which forced him to back out of the Grand Slam owing to his Covid vaccination status.

Neymar and Verratti, on the other hand, visited Monte Carlo after their impressive 6-1 victory against Clermont in Ligue 1 at the weekend.

Neymar and Kylian Mbappe had scored a hat-trick while Argentinian maestro Lionel Messi gave a hat-trick of assists to help the team script a comfortable win.

Paris SG Neymar Marco Verratti Football Tennis
Get the latest updates on ICC T20 Worldcup 2022, check out the Schedule and Live Score. Like us on Facebook or follow us on Twitter for more sports updates. You can also download the NDTV Cricket app for Android or iOS.