Maria Sharapova's last win over Serena Williams came at the 2004 WTA Tour Championships -- before even the birth of Twitter and YouTube. 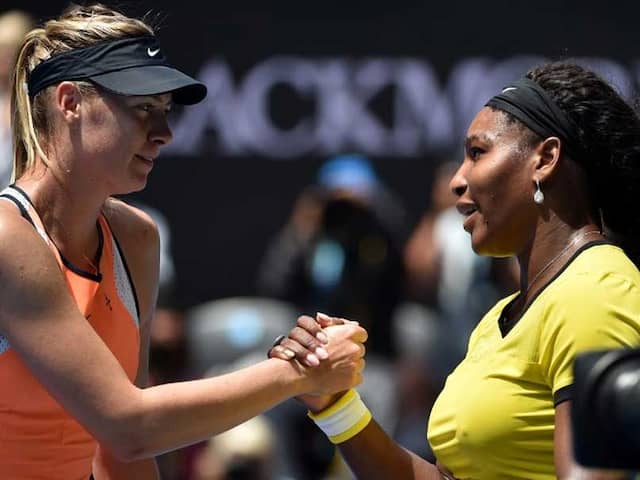 Maria Sharapova admitted on Saturday that "numbers don't lie" as she prepared to face bitter rival Serena Williams, who she has lost to 18 times in a row, in the French Open fourth round. Sharapova, who thrashed Karolina Pliskova in the third round, will face Serena for the 22nd time in the last 16 on Monday, after the American saw off Germany's Julia Goerges 6-3, 6-4. Serena leads her head-to-head record with Sharapova 19-2, with the Russian's last win coming at the 2004 WTA Tour Championships -- before even the birth of Twitter and YouTube.

Sharapova has lost their last seven women's singles meetings in straight sets and has managed to take only three sets off the 36-year-old in those 18 straight defeats.

It will the first time the two have faced off since the American's win in the 2016 Australian Open quarter-finals -- Sharapova's last match before serving a 15-month doping ban.

"Any time you play against Serena you know what you're up against," said the 31-year-old Sharapova, who beat Pliskova 6-2, 6-1 on Saturday.

"You know the challenge that is upon you. You know, despite the record that I have against her, I always look forward to coming out on the court and competing against the best player.

"I think there is a lot of things in her game that she's done much better than I have... Numbers don't lie."

Sharapova and Serena's rivalry is the most closely examined in the sport and not always for what happens on court.

There have been clashes over their private lives, while Sharapova claimed last year in her book that Serena "hates" her for hearing her cry after the 2004 Wimbledon final.

This will be the earliest the two have played each other in a tournament since a last-16 match at Wimbledon in 2010, with the majority of their meetings coming in finals and semi-finals.

But both are on the road back towards the top of the sport after their recent absences.

Serena had played only four matches since taking time off due to pregnancy before arriving at Roland Garros.

Sharapova is seeded for the first time at a Grand Slam since her suspension for using meldonium and is playing her first French Open since 2015 after being refused a wildcard by tournament organisers last year.

The Russian may feel that this is as good a time as any to play her nemesis, though, with three-time Roland Garros winner Serena lacking playing time, while Sharapova produced her best tennis since returning to the court in dismantling former world number one Pliskova.

But for all the bad blood between the two over the years, Sharapova hinted in her book last year that reconciliation may come once the on-court battles are over.

"Serena and I should be friends; we have the same passion. But we are not. I think, to some extent, we have driven each other. Maybe that's what it takes," she wrote.

"Only when you have that intense antagonism can you find the strength to finish her off. Who knows? Some day, when all this is in our past, maybe we'll become friends."

Comments
Topics mentioned in this article
Maria Sharapova Serena Williams Karolina Pliskova Julia Goerges Tennis
Get the latest Cricket news, check out the India cricket schedule, Cricket live score . Like us on Facebook or follow us on Twitter for more sports updates. You can also download the NDTV Cricket app for Android or iOS.