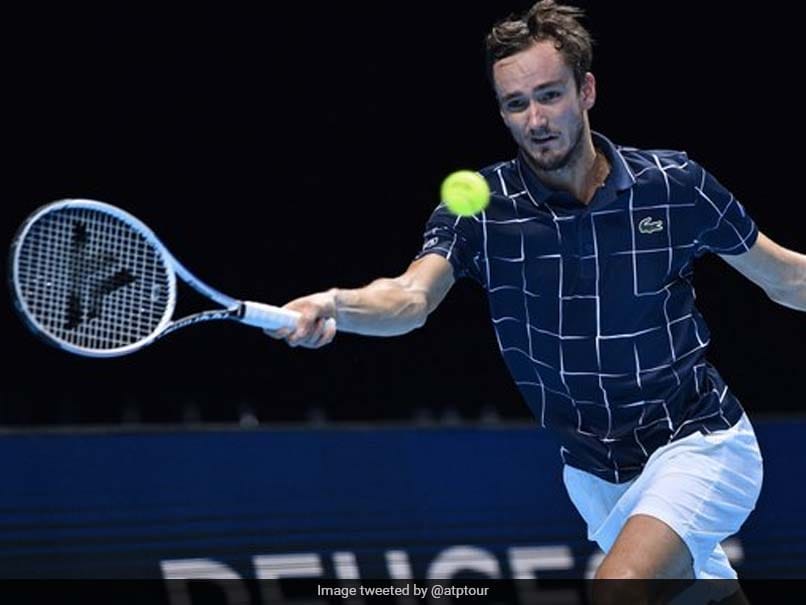 Daniil Medvedevshocked Novak Djokovicin straight sets to book a place in the last four at the ATP Finals on Wednesday as former champion Alexander Zverev got his campaign up and running. The Russian fourth seed went toe to toe with the world number one, winning 6-3, 6-3 in an absorbing, energy-sapping contest at London's empty O2 Arena. Earlier, German fifth seed Zverev beat Diego Schwartzman 6-3, 4-6, 6-3, bouncing back from defeat to Medvedev in his opening Group Tokyo 1970 match. Top seed Djokovic is seeking to match the record of six-time winner Roger Federer, who is absent from the season-ending tournament with an injury.

But Medvedev, who won the Paris Masters last week, beat Djokovic at his own game, grinding him down in a near-flawless defensive display.

The giant Russian earned a clutch of early break points and eventually made one count in the seventh game, which lasted 11 gruelling minutes.

The 24-year-old held serve easily in the next game and seized the opening set 6-3 when a rattled Djokovic double-faulted.

An increasingly confident Medvedev broke the 17-time Grand Slam champion again at the start of the second set to win his sixth game in a row in the round-robin match.

Djokovic stopped the rot on his own serve but was able to force just one break point, which he could not convert.

The victory takes Medvedev through to the semi-finals but five-time winner Djokovic still has a chance to progress in a shootout with Zverev on Friday.

"Always I like to pay Novak, first of all because he's one of the greatest champions in the history of our sport and when I was eight years old I was already watching him on TV winning Grand Slams," said Medvedev.

"He was still young -- so it was always a dream come true to play against him."

"I was serving good and playing safe enough in the most important moments and that's why I got the win," added the Russian, who lost all three of his matches on his debut last year.

Zverev, the 2018 champion, looked out of sorts in his straight-sets defeat against Medvedev on Monday and again struggled to find early rhythm in the early match in London.

The big-serving German was broken by Schwartzman in the third game but turned the tables with two breaks of his own to take the set.

Zverev who stands 28 centimetres (11 inches) taller than Schwartzman, appeared to be in control in the second set but stumbled twice on serve as his 28-year-old opponent levelled the match.

The momentum appeared to be with the Argentine but the match changed direction again in the fifth game of the decider when Zverev broke with a fine backhand volley, repeating the feat to seal the win.

"I'm excited for Friday," said Zverev. "Friday's going to be the most difficult match-up that you can have here, against Novak."

The German, who has won two titles in the coronavirus-truncated 2020 season, beat Djokovic in the final in London two years ago but is yet to win a Grand Slam.

Dominic Thiemis in charge of Group London 2020 after beating second seed Rafael Nadal on Tuesday to make it two wins out of two.

Novak Djokovic Daniil Medvedev Alexander Zverev Tennis
Get the latest updates on ICC T20 Worldcup 2022, check out the Schedule and Live Score. Like us on Facebook or follow us on Twitter for more sports updates. You can also download the NDTV Cricket app for Android or iOS.