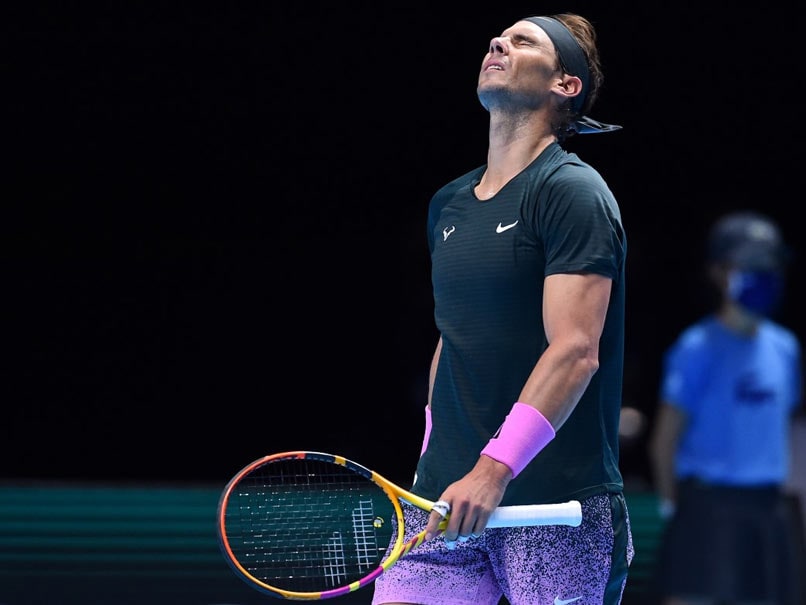 Rafael Nadal was unable to cope with Dominic Thiem's power and poise.© AFP

Dominic Thiem held his nerve to claim an impressive 7-6 (9/7), 7-6 (7/4) win against Rafael Nadal at the ATP Finalsas the Austrian moved to the brink of a place in the semi-finals on Tuesday. Thiem over-powered Nadal behind closed doors at London's O2 Arena to put a dent in the Spanish star's bid to win the ATP Finals for the first time.

The world number three, who defeated reigning champion Stefanos Tsitsipas in his opening game, has won his first two matches in this year's tournament as he looks to go one better than last year's runner-up finish.

Thiem will be guaranteed a semi-final place if Tsitsipas beats Russian seventh seed Andrey Rublev in Tuesday's other tie.

The 27-year-old has already enjoyed a year to remember, reaching two Grand Slam finals and winning one of the four majors for the first time when he defeated Alexander Zverev in the US Open final in September.

While Thiem eyes a last four berth, Nadal will have to beat Tsitsipas in his last group match to keep alive his hopes of reaching the semi-finals.

Nadal saw off Andrey Rublev in straight sets in his first match on Sunday, but the 34-year-old was unable to cope with Thiem's power and poise.

Now Nadal has to do it the hard way if he is to land the biggest prize missing from his trophy cabinet after losing the 2010 and 2013 finals at the prestigious season-ending event.

Nadal, who last month equalled Roger Federer's record of 20 Grand Slams by winning the French Open, has won 86 titles but just one of those has come on an indoor hard court.

The world number two has qualified for the ATP Finals for 16 years in a row, but his record at the eight-man elite event pales in comparison with Federer and Novak Djokovic after six injury withdrawals.

Although Nadal had vanquished Thiem in two French Open finals, the Austrian had no reason to fear him, having beaten the Spaniard on his favourite clay surface three times and defeated him at the Australian Open this year.

This was their first meeting indoors and a hard-fought first set went down to a tie-break without either player facing a break point.

Nadal raced into a 5-2 lead in the breaker, but hit back to level at 5-5 before his first double-fault gifted the Spaniard a set point.

Nadal drove a backhand into the net to give Thiem a lifeline and the Austrian saved a second set point with a fierce forehand winner.

Nadal responded with the first break of the match, unleashing a thunderous winner down the line at 3-3 in the second set.

Even then, Thiem wouldn't be subdued and, holding his nerve in a brutal baseline duel, he grabbed his own first break in the next game.

Thiem had three match points at 5-4 after a series of Nadal errors, but the Spaniard recovered his focus to save all three, his escapology even drawing rueful applause from Thiem.

Once again a tie-break was required and for the second time, Thiem came out on top, bludgeoning Nadal into submission with his relentless power and accuracy.

Comments
Topics mentioned in this article
Rafael Nadal Dominic Thiem Tennis
Get the latest updates on Fifa Worldcup 2022 and check out  Fifa World Cup Schedule, Stats and Live Cricket Score. Like us on Facebook or follow us on Twitter for more sports updates. You can also download the NDTV Cricket app for Android or iOS.